Hello, Everyone! I’m Daniel Castro and I’m back once again (after a somewhat long hiatus) taking command of the Retro ≠ Good column, where we talk about games that are not really that good, and this month’s title is River City Ransom!

Hold on a second…aren’t I the same guy who tends to use a River City Ransom character as his avatar? Who happens to have a webcomic mostly based on sprites from the series? And, who keeps talking about the game and characters every now and then?

Yes, I’m the same guy, and I do love River City Ransom, but this game is another fine example of how retro games are not as good as we remember, and how nostalgia-filled memories are able to cloud our judgment in a way politics can only dream about.

River City Ransom reminds me a lot of good things about videogame history, and my childhood as a videogame enthusiast. I remember (somewhat) clearly how I met this game the first time, when an old friend of mine invited me home to play this “crazy game where you could even lift your enemies and use them as weapons!”

The game radiates with inspiration; the cartoony characters are something you can’t just let go—they’re way prettier than many other sprites from the NES era. The game’s surroundings are also 8-bit pixel art at its best; every location is unique and you won’t have a problem trying to differentiate some spots from others (and that’s useful since you’ll need to do some backtracking later on).

The gameplay—despite its simplicity—is mind-numbing fun; the moment you punch or kick the first mob of enemies, you’re pretty much hooked and ready for more. All of this tends to trigger my nostalgia at some point, and I feel like punching and kicking my way into River City Ransom once again…and every time I do that, it always goes somewhat like this:

I start the game and have a lot of fun beating a few mobsters on my way; I head to the Grotto Mall and have some pancakes at the Rise & Shine Cafe; if I have enough money, I’ll buy the Stone Hands or Dragon Feet technique at the Grotto Book Store. 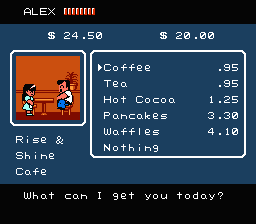 Then, I beat Moose—the game’s first boss—while I’m on my way to the Waterfront Mall, and around that moment…I realize the game is not as good as I remember.

From that point on, food and healing items get way more expensive, and tougher gangs chip crazy amounts of damage from my health bar. I’m required to level up my character so I can deal with later gangs and bosses, so I need to keep beating enemies up and down—or even re-beating some of the previous bosses—and collecting the money they leave when you defeat them.

This exposes another of the game’s weaknesses: it just stops being fun to keep beating the same guys over and over. Even worse, the colorful and engaging gameplay that the game has at the beginning is replaced by simply spamming attacks on your enemies using Stone Hands and Dragon Feet (the fighting techniques that let you punch or kick your enemies three times with a tap of the button) until you’re done.

Once you learn Grand Slam (which grants you the ability to spam weapon attacks in rapid succession), the game practically becomes a joke, and no one can withstand your never-ending barrage of traumatizing fury.

So every time I go back to River City Ransom, I eventually get bored and then I just rush my game to the end, not looking forward to repeat that once again—until nostalgia tricks me to do it once again later on. So, why do I like this game?

Well, River City Ransom is indeed a great game, but like many other old-school games, it is better appreciated when you look back to the days when the title was released. The game was pretty well ahead of its time. It added RPG elements into an action game like not many titles did before, so it’s basically an experiment on its own.

The issues I have with River City Ransom are that I can’t really digest some of the gaming nuisances from back in the old days. Level grinding is something I’m not willing to do today, but back then that was the way RPGs (or action games with RPG elements, in this case) were played, and that’s something the younger and more easily impressionable version of me was capable of enduring.

Aside from that, the game’s amazing, and while it isn’t as popular as other franchises from the 8-bit era, River City Ransom is considered a cult classic that has influenced some of today’s gaming landscape.

Level grinding is something I can’t really endure anymore, and we usually miss these kind of old-school annoyances because “those were the day, back then”. In reality, “back then” developers had to keep nags like these around because they didn’t know any better, and we just got used to them because it was all we had, but today there are better ways to handle those things. 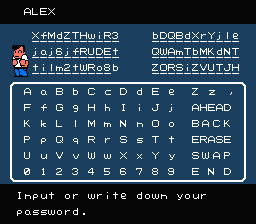 Above: Don’t you just miss writing down long, overly-complicated passwords?

As a matter of fact, let’s look a decade back at River City Ransom EX—the remake of the NES classic for Game Boy Advance in 2004. The game looked great! The characters’ animations were improved and looked more fluid than back in the original, there were many new techniques you could learn, and you could even recruit some of the bosses to help you out.

But, all these improvements meant nothing when the game remained practically the same. Level grinding remained the rule of the game, so you could beat the whole game in matter of hours, and you could easily ditch every new technique in favor of Grand Slam and a couple of the old ones.

In the end, River City Ransom EX was mostly forgotten during its release date, and I can’t really blame anyone for overlooking it. Game reviewers had to compare RCR EX with all the other titles available on the portable console in that year, and by that time (early 2004) the Game Boy Advance housed an outstanding assortment of games that took serious advantage of the new portable’s possibilities.

Above: Seriously, which games would you put your money on?

Prettier graphics and animation aside, RCR EX feels like they just dragged the classic game kicking and screaming into a newer (and more critical) audience, and expected them to accept it as-is—with the same gameplay issues it served ten years before.

Luckily, the original River City Ransom‘s memories refused to die for some people after these many years, and its influence has been seen a bit in recent years. Like other old-school genres, brawlers didn’t quite survive the 3D transition brought by the late ’90s, but thanks to this era of easily-accessible and affordable indie games, there are a few games that take us back to the excitement of 2D beat-’em-ups from that era.

The first game that made me miss River City Ransom in this generation was Castle Crashers, which has pretty similar gameplay and a leveling system that keeps your funny-looking little knights getting stronger as they advance through the story. Also, the game’s intro absolutely rocks. It had the effect of a love letter on me. 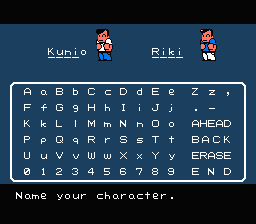 Watching this in motion made me feel like I’d known these guys my whole life.

Of course, the first game that actually comes to mind would be Scott Pilgrim vs. the World, considered River City Ransom‘s spiritual successor for how much it stayed true to its classic gameplay. From the coins enemies leave behind after their defeat, to the leveling system, to the shopping—and, yes…you can pick your enemies up and use them as weapons.

Above: Thrash cans, bottles, buckets, sign posts, enemies…all…all can be used as a weapon.

Lastly, but more importantly, there’s an actual sequel of the game on its way. River City Ransom: Underground, which was funded last year on kickstarter, is being made by Conatus Creative—a team of developers obviously influenced by the classic brawler, and willing to take the game’s license and finally delivering a sequel…after over 20 years!

I’m really anxious about how this game will turn out. It’s actually the first thing I had ever backed on Kickstarter, and thanks to that I’m able to access the developers’ forum, where I can read a bit about the game’s development process.

So far, River City Ransom: Underground seems really promising. I can see everything that made great the original game there, plus some seriously overhauled gameplay and animations that would surely meet our modern standards.

Still, my question remains: how much of the same grind-fest will this game actually sport? While discussing about the game’s difficulty settings, Bannon Rudis—the art director and game designer—mentioned:

I loved Castlevania: Symphony of the Night, but by the time I got to the second castle, I was destroying everything in my path with no problem. That is something I would love to avoid, but not rob the player of all the grinding to build up their character to a “Hulk Hogan going into a berserker rage” status.

While that statement confirms that there’ll be some kind of level grinding present in the gameplay, it is also telling me that some of the annoyances that usually accompany said practice are being considered for the final game.

This is the part where I don’t agree with all those purists out there: While level grinding does play a big role in the old game, that doesn’t mean that it is indeed an integral part that River City Ransom can’t live without.

Yes, River City Ransom won’t be “the same” without level grinding, but that’s the point of a new game: to be something new, be something different than the one we already have. I mean…don’t we usually revile over those games that keep doing the same thing over and over?

All in all, I love the old River City Ransom sans its old-school nuisances, and I want to see the series evolve into something more worthy of this gaming generation beyond better graphics. I wouldn’t dare try to erase any kind of good memory someone might have with this (or any other) game as a kid, but let’s not try to over-impose our generation’s recollections into the newer crowd just because “those were the days, back then…”.

When we’re talking about a classic game like River City Ransom, let’s focus more on preserving all the good things it has to offer, and not on those “retro” aspects of the game we nostalgically remember as “good”.