If you were to look back at the past couple generations of consoles through today’s, one could argue that their defining traits were in their control schemes as much as their graphical prowess. From the incorporation of dual thumb sticks to motion controls and gesture-based touch-screens, each new means of interaction meant new genres and/or old ones reimagined. As powerful as the current console generation is already proving to be, there’s no denying that it brings with it another new input: the second screen.

Be it our smartphones, tablets, or other proprietary devices, the second screen is undergoing a change as we figure out where it belongs, which genres it benefits most, and what new ideas can be explored with it. Newly formed studio Prismatic Games has a stake in answering this question, and its first attempt comes as a real-time strategy game for the Nintendo Wii U known as Hex Heroes. With the touch-screen enabled controller in hand, one player takes to managing resources and overseeing the battlefield while friends in the same room head to the front lines — turning an otherwise myriad of tasks for one person into focused roles for individual players.

By splitting up the traditional RTS formula across a team of local friends, Hex Heroes is at once drawing on the social dynamics and thrills of a LAN party while making the experience more accessible to all kinds of gamers and more appropriate for the console format itself. What makes the stakes even higher for Prismatic Games is that the game is being crowdfunded through Kickstarter, with less than a quarter of its goal still to be met within in the next 50 hours. As the campaign enters its final stretch, Hex Heroes producer Chris Jennewein and I got to talking about what players should expect in the game, the goals of the project, and how focusing on a Wii U release and going through the Kickstarter format benefit it.

Andrew Kuhar: Hex Heroes will be available on PC, but the optimal experience looks to be exclusive to the Wii U. What does the Wii U’s control scheme afford the game, and what else besides that drew you to the console?

Chris Jennewein: Although asymmetric gameplay is possible on PC, the Wii U is better suited to provide it as a local experience and, being a console, in your living room. We enjoy couch co-op games, and we just don’t think there are enough.

Nintendo games in general have a certain feeling about them that distance themselves from games you’ll find on other consoles. Even if we personally owned an Xbox or PlayStation, our Nintendo library would be much larger, so we think we understand what Wii U owners are looking for because we’re looking for the same thing.

We’re also PC gamers, but there is such a variety of PC gamers that we think Hex Heroes will appeal to them in many different ways.

Kuhar: Game designers have historically had an uphill battle bringing the RTS genre to consoles. In what ways does Hex Heroes offer something different from what we’ve seen before, and how will it handle some of the challenges that the genre has faced in past?

Jennewein: RTS games are often considered hardcore and have a steep learning curve. Hex Heroes will lower the learning curve but still contain hardcore elements that RTS players are familiar with.

The obvious challenge of an RTS game on a console is the control scheme. The Wii U GamePad with its touch screen can simulate many computer-mouse actions. Hovering on an object is one feature that could get lost, but we’ll find ways to compensate. Take Age of Empires, for example. If you go to buy a building, hovering would allow you to see where you can place the building — it appears green if it can be placed and red if it cannot. But in Hex Heroes, we make up for hover with our hex map — buildings can only be placed on cleared hex tiles. When you tap a tile, the building will be placed, and you confirm if that’s where you want to place the building. If the tile is not cleared, the building will not show up, so you wouldn’t be given the option to confirm its placement. 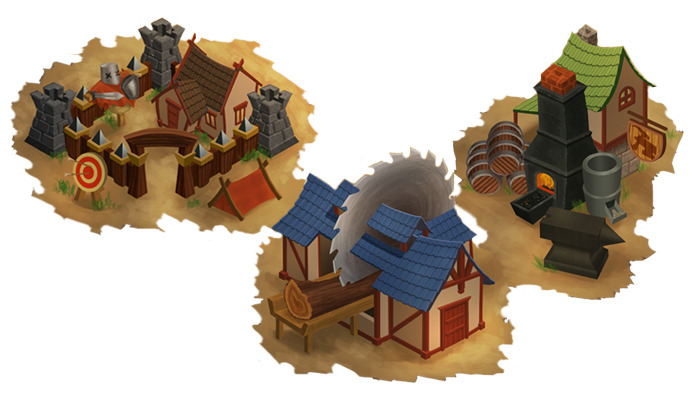 Kuhar: How has splitting up fundamental RTS roles — the commander and the soldier — across a team changed your approach versus if you were building a symmetrical/single-player RTS?

Jennewein: It comes down to balancing the roles. We don’t want to lose that strategy element that comes from the commander role, so we’ll be delegating a lot of the numerical data, like health and resource count, only to the GamePad. The TV players will have subtle visual clues, but for the most part, there won’t be many UI elements on the TV. So then it’s really imperative that the GamePad pay attention to whose health is low or if they have an abundance of wood.

Kuhar: RTS games are of course well known for their multiplayer modes, but Hex Heroes’ take on it feels a little more current generation: It’s asymmetrical. Could you talk more about that and the kind of experience you want players to have?

Jennewein: Hex Heroes won’t be like some RTS games where the best players are measured by clicks per second. We really believe that anyone can have fun playing Hex Heroes because there are many roles to fill. We hope that players will take the time to try out different combinations to find the play style they like best. And when they find it, we want them to feel comfortable in their role and a part of their team.

Kuhar: How much range can a team have in terms of its size and class chemistry? Will the gameplay be forgiving enough to accommodate different combinations, especially in light of the cooperative play being asymmetrical?

Jennewein: Allowing the TV players to each choose two classes to switch between means that no player will be stranded without options. A full team can potentially play as all eight classes, but that won’t necessarily be the best combination. We expect certain classes will be suited for specific tasks, but we won’t underestimate players’ abilities to master their favorite classes.

If there is an experienced player wielding the GamePad, they’ll learn soon enough what information they’ll need to be giving to the players when they ask, “How much health do I have left?” or “Where do I go?”. They’ll also get the chance to experiment if they want to construct buildings or power up the players.