Kuhar: Hex Heroes is described as a party game. How will that inform the pace and flow of each battle/gameplay experience? Could you give an example of a compelling situation you’d expect to find players in?

Jennewein: Cooperation is key in Hex Heroes, and the party element is going to make the game very dynamic. The flow and pace of each experience is highly dependent on players involved, and since we’re making the game as accessible as possible, the possibilities are endless.

An example: Your father has the GamePad, and you and your brother and sister have the TV. Maybe your father grew up with old-school RTS games and is really skilled at micromanagement, but your little brother isn’t as seasoned in video games. Dad can spend more time with his youngest, guiding and directing him while occasionally keeping an eye on the rest of the team. The entire dynamic is affected thusly by skill.

Here’s another: You and your friends are all skilled gamers. You take to setting leaderboard records and decide to pick lair mode as the challenge of the day. You all set out, knowing exactly how to tackle the situation, and you keep in constant communication. The GamePad player knows when and how to spend resources to shave off crucial seconds, and the TV players know when to go in guns blazing and how to keep the team informed.

Kuhar: What steps are you taking with Hex Heroes to ensure fun for more casual players? Does that change the management systems RTS games are defined by?

Jennewein: If your little sister has been bugging you to let her play, set her up with a harvesting class and let her go to town on chopping those trees. Or have your mom explore the land as a scout and avoid the enemies. The casual player has a role in Hex Heroes that’s beyond just the GamePad, and we’ll be adding elements that keep it fun. Not all role-playing game players consider grinding to be a chore if they can see the effects of their work. 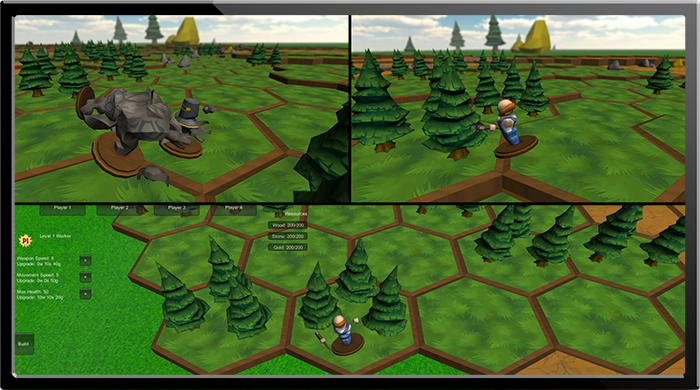 Kuhar: What other modes and options for play will players find in Hex Heroes?

Jennewein: Hex Heroes is starting with horde mode and lair mode, both can be played solo or multiplayer. As we reach our stretch goals, we’ll be adding more modes with specific objectives.

We don’t want anyone to miss out on the fun of Hex Heroes, so we’re including a single-player online mode with our initial goal. So even if you don’t have friends to come visit, you can hop online and play against a fellow hero.

Kuhar: Banjo-Kazooie and GoldenEye were two hallmarks of my video gaming experiences as a child, and their soundtracks are such a big part of those memories. How did Grant Kirkhope get involved with Hex Heroes, and what does he bring to it?

Jennewein: It wasn’t until we realized that through some channels we could contact Grant Kirkhope. As soon as Mario Castañeda [the co-founder and creative lead of Prismatic Games] found out that was a possibility, he jumped on working the connections he had to reach him. After a couple months of back-and-forth emails, Mario finally met Grant in person at the Game Developers Conference, and the two hit it off pretty well. Grant’s a very down-to-earth guy and super busy, too. We’re ecstatic to have him aboard the project because of the experience he brings. It speaks to how committed we are to developing a high-quality game.

Kuhar: How has Kickstarter influenced the project thus far, and how do you think it will affect it going forward if the game reaches its funding goal?

Jennewein: Our Kickstarter backers proved what we already suspected — there are Wii U owners who want more games that take advantage of the GamePad. Our backers helped narrow down the last four playable classes from a list of 12 we devised. One of the classes was actually a backer suggestion, so they’ve already influenced some of the mechanics of the game. With the Kickstarter rewards, we’re giving backers the chance to add sounds to the game, become an NPC, design a costume for a class, and give us their ideas on game mechanics and monsters.

A big thanks to Chris Jennewein for taking the time out of a very busy Kickstarter campaign schedule to answer these questions. Full disclosure: Chris and I were both former classmates and game design colleagues years back. Knowing him and most of the team he’s working with, I can say from personal experience that it’s in the good hands of very passionate gamers.