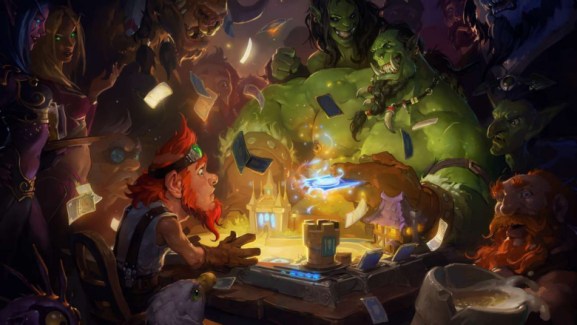 I really dislike the World of Warcraft aesthetic. The massively multiplayer online game’s world is ugly, the characters are garish, and the colors are nauseating. However, this prejudice has, as I’ve been told, stopped me from enjoying a rather charming and engrossing universe of characters and lore. It was not until Blizzard showed me this universe in different clothing did I start to realize that maybe there is something to this.

Hearthstone, a new digital collectible card game, immediately exploited my nostalgia for the Pokémon and Yu-Gi-Oh! trading card phenomena I was steeped in as a child. After a quick explanation from a friend, the simple mechanics would not have even appealed to me if it weren’t for the goofiness of it all. Where Heartstone really succeeds, for me, is in its presentation.

When casual puzzle game Peggle exploded onto the scene in 2007, it introduced something new to gaming world: Presentation can make a game. Point the ball and let it hit the pegs on its way down — at its core, Peggle is as simple as it gets. PopCap Games, however wrapped this simplicity in visual and aural verbosity: Bright colors, explosions, cute characters, “Ode to Joy,” and rainbows assault your senses.

While admittedly more complicated than Peggle, Hearthstone takes the mundanity of a card-battle game and throws a charming coat of paint on it, leaving me with a full appreciation of the purposeful pizazz of a universe of characters. With every action comes a piece of dialogue or a sound effect and an overly animated rise and fall of cards — a constant feedback loop of sensational cause and effect that interrupts the tactics and mathematics buzzing through the player’s head. Your cold, hard strategy is presented with goofiness.

It’s a sort of irreverence for Warcraft, or at least what I picture it to be. The presentation would not have been so effective if the game were to take itself too seriously. It is simply an effective execution of tone. To me, the consistency of the feelings communicated in a game like Hearthstone breeds both a familiarity and a novelty at the same time.

I’m not saying that all games need to be like this, but a lot of games could use it. Maybe I am a little too sensitive to this kind of thing, but seriousness in a game seems harder to pull off. It’s as if the more serious a game presents itself to be, the more chances there are for this illusion to break.

So will this make me try World of Warcraft? Probably not. I still can’t stand the sight of it.

But what Hearthstone has made me realize is that I “get it” — the characters and charm of Warcraft. It just took new clothes and a bit of jest to get me to care.