At the height of its power, Atari seemed to be able to do no wrong. It was the King of Video Games, but its time on the throne was borrowed against cheap, third-party games (and of sometimes even poorer quality) that flooded the market alongside a heavy handed hubris with retailers and developers that Nintendo would reputedly imitate to some extent later.

It wasn’t so much a mystery in seeing E.T. buried in a New Mexico landfill as it was a monument to a company’s decline. After all, the New York Times and Alamogordo Daily Mail had both reported on the event back in ’83. Since then, however, it had transformed into a kind of mythic enterprise, a cultural pop legend that grew larger and larger with every telling.

But gaming’s history is riddled plenty with legends and myths of its own, some weirder than others, and here are four more that have become legendary in their own way — and are still waiting to be answered.

The Arcade Game from the CIA 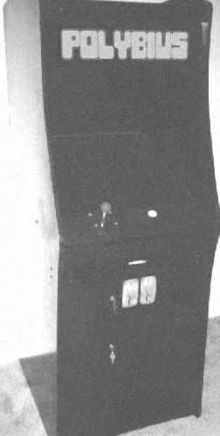 Above: Wikipedia says this is a “supposed” image of the game, but no one has been able to corroborate whether it’s real or a clever mock up.

With that America’s Army FPS and talk about the NSA masquerading as players in World of Warcraft, neither of these are the first time that the government has been tied to video games.

Polybius can also attest to that. Or would if anyone could find concrete proof if it really was some kind of government experiment that melted the sanity of whoever played it. Unlike its namesake’s insistence on historical fact, the story behind Polybius is something of the opposite.

So what was Polybius? It supposedly appeared in Portland, Oregon, in 1981, and was apparently the Flappy Bird of the local scene, drawing in lines of players. According to an anonymous posting in 1998 on coinop.org which sparked renewed interest in the game:

The bizarre rumors about this game are that it was supposedly developed by some kind of weird military tech offshoot group, used some kind of proprietary behavior modification algorithms developed for the CIA or something, kids who played it woke up at night screaming, having horrible nightmares.

According to an operator who ran an arcade with one of these games, guys in black coats would come to collect “records” from the machines. They’re not interested in quarters or anything, they just collected information about how the game was played.

The game was weird looking, kind of abstract, fast action with some puzzle elements, the kids who played it stopped playing games entirely, one of them became a big anti videogame crusader or something. We’ve contacted one person who met him, and he claims the machines disappeard after a month or so and no one ever heard about them again.

Since then, its reputation began branching out into a variety of hoaxes, half-truths, and even mock-ups based on supposed descriptions of the game. It was even spoofed in an episode of The Simpsons.

So did it really exist? No one is really sure, but skeptics such as Brian Dunning over on Skeptoid argue that the urban legend is likely an amalgam of several events that went on in the early ’80s arcade scene.

A few isolated incidents where players suffered ill effects from playing arcade games such as a 12-year old playing Asteroids for 28 hours until he “bowed out with stomach discomfort, attributed to anxiety and all the Coke he drank” to another player suffering migraine headaches over playing Tempest contributed to the impression that video games were somehow harmful to play. This was also the ’80s when games like Dungeons & Dragons were being attacked as recruitment tools for Satan.

On the other hand, others insist Polybius exists, with photos of reputed cabinets mysteriously showing up from time to time. There are even one or two homebrew games built around what is speculated about Polybius. To this day, people are still wondering whether or not it’s another legend gone wild … or gaming’s own Priory of Zion.