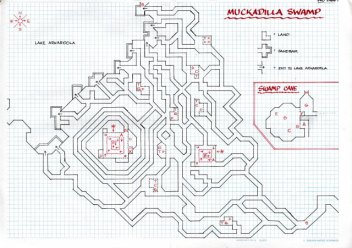 The Wizardry VIII that we know today wasn’t supposed to be the same Wizardry that Brenda Romero and her team had worked on in Canada.

According to the RPG Codex, the next Wizardry was outsourced to distributor, DirectSoft, in Australia instead. That was because longtime Wizardry designer D.W. Bradley and his team had left the building in the early ’90s. That also left Sir-Tech with a problem if they wanted to make a sequel to Wizardry VII.

It was to be called Wizardry VIII: Stones of Arnhem, but little else had been revealed on this version of Wizardry that was ultimately canceled. That is, until fairly recently towards the end of 2012.

As the Codex’s article explains, the Australian production’s development team was made up of an actor, a filmmaker, and programmers Michael Shamgar and Cleveland Mark Blakemore.

The epic thread paints the Stones of Arnhem as a bizarre mix of “genital” monsters, design woes, and broken promises. But it’s a fascinating read all the same. As to the degree of which pieces are true or not, that’s up to the reader to decide.

So it’s probably not surprising that there were doubters on whether Stones of Arnhem was actually a real thing until an eBayer under the moniker “Hotalibi” showed up in the thread claiming to have bought at auction a storage locker crammed with materials from Sir-Tech’s old Ogdensburg HQ. 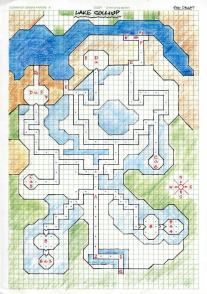 Packed in with a host of other relics were the original design materials for Stones of Arnhem and to prove it, Hotalibi began posting scanned images of some of what was found. From a video game preservation perspective, it was a bombshell find — a lost cache of materials from one of CRPG’s iconic studios. Hotalibi wasn’t even a regular at the Codex — he (or she) dealt more with antiquities. This person found their way to the Codex by searching for info on this odd find and found people on the forums who were all too happy to help out, especially after the scans started coming in proving that Stones of Arnhem was real.

And it was all going up in batches on eBay.

Along with a few Codex members, the Museum of Computer Adventure Game History managed to snag some of that content and posted it up on their site to help preserve it. But the forum also noted that someone in particular was placing huge bids on certain pieces. An expensive race was roaring to life on eBay over Sir-Tech’s bones.

I say ‘managed,’ because shortly afterward, a number of the auctions were suddenly canceled, and the next batch never went up as far as I was able to tell. Speculation ran rampant on why — or who — might have been responsible for making Hotalibi cancel them prematurely — including the potential legal ramifications over the sensitivity of some of the other documents included in the haul. From what could be seen in the auctions, there was quite a bit of material covering Sir-Tech’s internal history from the ’80s onwards through ledgers and meeting notes.

So what happened to the rest of the trove? No one is sure, even today, although the Codex managed to preserve a few of the pics taken of the materials in question, saving what they could from disappearing into someone’s private collection. Or another storage locker.