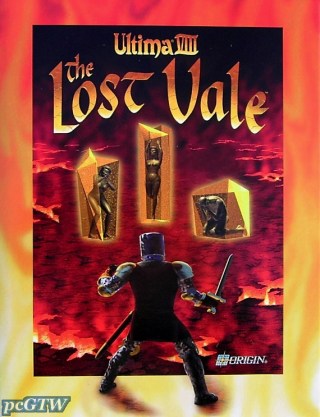 In reminiscing about it, I suggested that it was probably the “universal ammo” moment for the series to many longtime fans who grew up with the statistics heavy and party oriented mechanics of the previous titles. There’s a reason why some had gone so far as to call it “Super Avatar Bros.”, and no, that wasn’t a compliment. A patch had even gone out to make the platforming jumps easier to execute.

So it was big surprise to me when I learned years later that EA (who, by then, owned Origin) had actually planned an add-on for the ill-received game. After all, the popular Ultima VII had gotten its own add-on with the Forge of Virtue which tagged in a few more hours of side questing play along with The Silver Seed for Ultima VII: Part Two.

Unfortunately, back at Origin, the developers assigned to it were less than thrilled. As designer and author, Sheri Graner Ray, explains in a posting on her personal site in remembering her time on The Lost Vale:

It was after Ultima 8 shipped and we were exhausted. Warren Spector called me, Lisa Smith, Rob Corell into his office to tell us we were on the U8 add on. I will be honest and say we were NOT thrilled. We’d all had just about enough of U VIII and wanted to move on. But, it was a chance to do stuff, so we did it.

Sheri Graner Ray goes on to explain the finer points of what The Lost Vale included ranging from a soldier with PTSD that the Avatar could help to a tribe of NPCs that talked like Yoda. There was also a mystery surrounding missing gods and a city that slept atop a mountain (which you had to get through via a jumping puzzle).

At the end, as she explains, “Lost Vale was finaled and gold mastered” after a three month development period, and then, right before it was sent out to the publisher, it was canned.

Warren Spector broke the news to them citing the low sales of Ultima VIII. Over at Dino’s Guide to Ultima VIII, you can see a number of odds and ends on The Lost Vale collected together, including photos of the box art which apparently sold on eBay for the princely sum of $1,923 in 2005. Denis Loubet, the Origin artist responsible for much of the art on Ultima’s boxes and many of the games, confirmed that the box was the real deal.

The Ultima Codex, the fan-driven repository for all things Ultima, had also managed to get scans of the plot docs for the expansion that you can view at their site or download as PDFs. But what about the gold master?

Sadly, according to an interview that Sheri Graner Ray did for Gamesbanshee in March, 2013, she has little faith that it was archived, underscoring one of the problems video game preservation often faces when it comes to digging up the past — that companies may not have that in mind when they move from project to project.