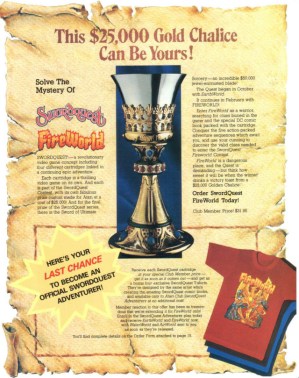 Above: The Chalice was life-sized, standing at “seven to eight inches tall” with the platinum cup “three or four inches” wide, making it some of the most precious gaming swag ever made.

As I mentioned at the start, Atari at the peak of its power seemed insurmountable. It was like staring into the black plastic face of an Atari Titan without any weaknesses as it pummeled shelves with amazing box art. Even a questionable Pac-Man port couldn’t stop this juggernaut alone.

It also seemed to be able to print money almost at will. That translated into titanic profits especially after Space Invaders became the killer app for the console in 1980, quadrupling sales seemingly overnight. In 1982, a year before the video game market’s fortunes turned, they launched a mega contest promising $150,000 in prizes with Swordquest.

Swordquest was planned out as a series of four games: EarthWorld, FireWorld, WaterWorld, and AirWorld. Though none of the puzzles in the games made a whole lot of sense by themselves, the included comics by DC explained what the stories were all about as well as provided key clues on discerning the hidden phrase buried in the games.

Players sent back proof after which Atari would invite, expenses paid, the winners to compete in a contest to determine a particular title’s champion. The games were also pretty tough because of how obscure the challenges were. For example, 4,000 entries claiming to have found the right answer were sent in the EarthWorld contest, but only eight people had actually put together the correct phrase from the clues.

And forget gold cartridges. This loot was actually made out of the stuff..

According to Scott Stilphen’s article over at 2600 Connection, each game had a prize attached to it worth $25,000 each (though as Stilphen notes, the first two prizes were actually estimated afterwards to be worth a bit less). A fifth prize would be awarded in one final contest to determine the ultimate winner from the four champions – a life-sized sword with a platinum blade and jeweled, gold hilt worth $50,000 patterned after the Sword of Ultimate Sorcery from the story behind the games as told by the comics.

Scans of the ad campaign are listed over at Stilphen’s article along with rare photos of the actual prizes – well, three of them anyway. Altogether, the prizes were:

The contest was never completed. 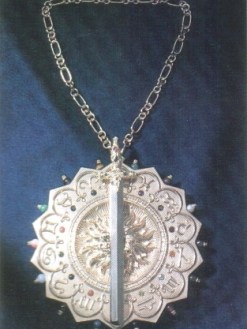 Above: The EarthWorld Talisman was a pretty big chunk of change –about $15,000 worth, far short of the $25,000 value boasted by Atari’s marketing. Winner, Stephen Bell, kept the sword but melted the rest down to pay for school.

In an interview over at Digitpress by John Hardie, Michael S. Rideout (winner of the FireWorld contest) recounts that the prizes do exist — he saw them himself as they were displayed under heavy guard at the FireWorld contest. He also notes that he has no idea what became of the Crown, the Philosopher’s Stone, or the biggest prize of all — the Sword of Ultimate Sorcery.

Atari decided to simply pay off the winners when they announced that the contest was ending prematurely, so instead of duking it out one final time, wrote checks to both Rideout and the champion of EarthWorld $15,000 apiece (and included an Atari 7800 with their choice of games) with the WaterWorld finalists earning $2,000 as consolation prizes. AirWorld just never was.

As the interview bears out, the EarthWorld Talisman was ultimately melted down by winner, Stephen Bell, for the metals and jewels. The Chalice is still kept by Rideout in a bank and looks pretty gorgeous. But as for the Crown, Philosopher’s Stone, and the Sword, who can say?

Speculation suggested that they eventually fell into the hands of Jack Tramiel, the father of the Commodore 64 and who had purchased Atari’s home console and computer divisions in ’84. Yet he had neither confirmed or denied that he or his family actually have them, leaving that a big question mark. Jack Tramiel passed away in 2012 at the age of 83.

They could also have been scrapped for their value by Atari. Or maybe they’re still in a vault somewhere, lost and forgotten, as Sir-Tech’s own past was, waiting for someone to rediscover them.