It’s no secret: the first-person shooter (FPS) is one of the most popular video game genres ever. With numerous triple-A franchises like Battlefield, BioShock, Call of Duty, Halo, and Killzone — as well as new titles that have popped up, like Titanfall and the upcoming Destiny — these games aren’t going away anytime soon.

Now, I’m not the biggest fan of the genre myself, by any means. Some games have come and gone in this genre that have taken me aback with awe, but they are few and far between. I’ve never really been able to pinpoint why, however. What about these types of games turns me off so much? To understand my issue with first-person shooters, I have to look at every aspect of them and figure out why I don’t much care for blasting aliens, soldiers, or anything else that moves.

When it comes to gameplay, you pretty much know what to expect from an FPS. The gun you’re holding is right in front of you. You can sprint, crouch, and toss grenades — all that good stuff. Taking cover is essential if the enemies aren’t completely brain-dead. There are cramped corridors that emphasize quick reflexes and open areas that serve as arenas for giant set-piece battles. All of these things can be expected within the FPS genre. Some games like to mix it up a little, though. Call of Duty’s fast, frenetic pace allows for an increased level of intensity and reflex. Halo and Killzone play slower but also have intelligent enemies that force you into hiding on more than one occasion and challenge the player to plan out strategies on the fly.

Most shooters like to add little bits of variation into the gameplay, like the cover system in Killzone 2 and 3 and superpowers in BioShock. Most of these games are copycats of each other, however, stemming from a well-known template. You know what to expect gameplay-wise, so it becomes such that players don’t feel the same level of excitement that came from playing all the big-name titles.

This is one of the reasons why the FPS genre doesn’t interest me. If I find I’m going to be playing another Halo clone or Call of Duty copycat, I know what I’m getting into, and I don’t bother with it at all. In turn, these clones make me see the shortcomings of the original games and turn me off from them completely, even after playing and somewhat enjoying them at first. But in all honesty, as long as the game is functional, I’ll still give it a chance.

That being said, there’s not really much developers can do to spice up the gameplay. Sure, recent titles like BioShock Infinite add little tricks like the skyline, and Far Cry 3 adds role-playing game elements that offer perks to make the game easier, as well as a gigantic island sandbox for you to play around in — but they both still follow the same basic FPS formula. If anything, the formula has become dated as a whole. How else can developers depict shooting someone? I don’t think there are a lot of new ways, to be honest, without attaching other genres onto it, which doesn’t necessarily assist the evolution of the FPS at all. 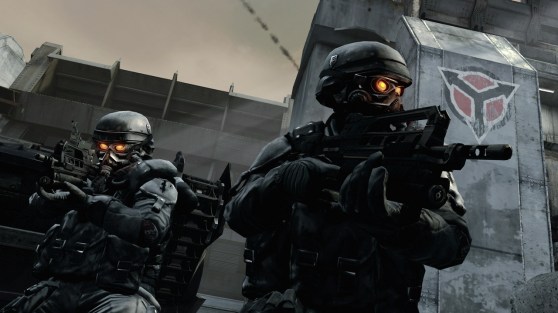 As much as I talk about the gameplay, what really immerses me in a game is the story. This is where most modern shooters are severely lacking. Now, mind you, there are a lot of FPS titles that have outstanding stories with impressive themes. BioShock is a social commentary on the human condition amidst the background of an Ayn Randian dystopia. Far Cry 3 challenges the player to understand the depths of one’s inner demons and how far redemption can truly lie. Fallout 3 provides a world that might come to life should a nuclear apocalypse threaten the existence of everything we know and love. Many other titles are included among these, but I won’t list them all.

The rest of the pile, however, doesn’t even bother with a good narrative. Battlefield tries to capture the brutality of war but suffers from stiff voice acting and clichéd plots and dialogue. The Call of Duty series, while impressive in relaying that war is a necessary evil, suffers from uneven pacing and a few WTF moments that make no sense in relation to the gameplay. Halo is a sci-fi shooter that shows very good technological and philosophical depth but lacks in the human department when it comes to the human characters, of all things (Cortana is the most human of any character, and she’s an A.I.). Killzone barely has a story to begin with, only telling you that the Helghast are evil Nazi ripoffs that must be killed. As impressive as the action and visuals are, the stories of most FPS games seem to always fall flat in some area or another.

So then, why do I constantly find myself playing these games in spite of their now-dated gameplay and limited amount of truly epic stories? Well, not only are headshots immensely satisfying, but there’s just a certain sense of gratification in wiping out a mass of 50 well-trained soldiers and aliens all on your own. Taking a shotgun and clearing a room is brutal but awesome. Sniping an annoying rocket launcher just makes you clench your fist in a victory pose. The satisfaction from killing these usually competent enemies just keeps me going. Add in multiplayer, where taking down a skilled player amplifies that feeling, and you understand why I as well as other doubters continue to play these games.

This is the problem — as we know what we like and continue to buy games within the comfort zone of the FPS while avoiding those that attempt to change the formula. If you’re used to the way Call of Duty plays, you’ll avoid anything that plays like Halo or BioShock or whatever else feels different. The thing is, they all pretty much play the same at their core. Sure, the buttons are different, the pacing is changed, and the gun weight is varied, but each game is still powered by the same gameplay philosophy, with a few exceptions here and there. Once this problem is addressed, only then can the shooter truly evolve into something better than itself.

Until then, you’ll just have to settle for bland stories and gameplay you swear you’ve played before.