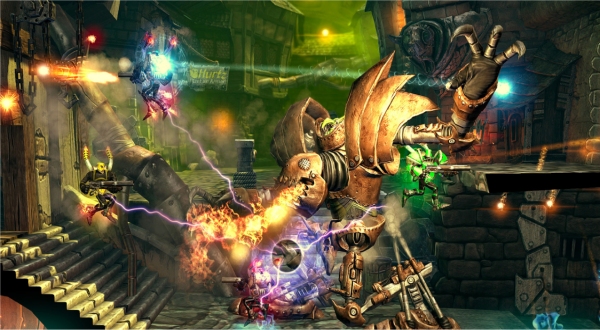 One of the few games coming out that really works hard to capture the fun and novelty of four-player, couch co-op gameplay is making its way to Steam’s Early Access program this July. In fact, it’ll be arriving on Early Access as soon as July 17th.

Black Forest Games recently announced in a press release that after a successful (and very much rebooted) Kickstarter campaign – following in the footsteps of the developer’s previous title, Giana Sisters: Twisted Dreams – Dieselstormers is now taking the next step toward bringing some unadulterated, high-end co-op action to PC gamers.

Adrian Goersch, founder and CEO of Black Forest Games, shared some thoughts of positivity about the milestone for the game, saying that “Things are going very nicely at the moment. We’re right on schedule and we can’t wait to finally present Dieselstormers to the players,” Said Adrian. “It goes without saying that we want to thank our supporters by delivering on time and providing great content.”

After accruing $53,000 in Kickstarter funds, the company began working on finishing the game up enough so that those who backed the project – as well as those who didn’t know about the Kickstarter but have a striking interest in the title – will be able to play an alpha, or Early Access, rendition of the game.

The title itself is a diesel-punk, action, platforming, role-playing game. Players will customize weapons, upgrade their character and take on colorfully dynamic orcs in a sort of alternate universe, side-scrolling take on Warhammer 40,000.

The game looks like it could be bucket-loads of fun (depending on how polished the gameplay is). If you’re looking to learn more about Black Forest Games’ upcoming title, feel free to check out the game’s official website.