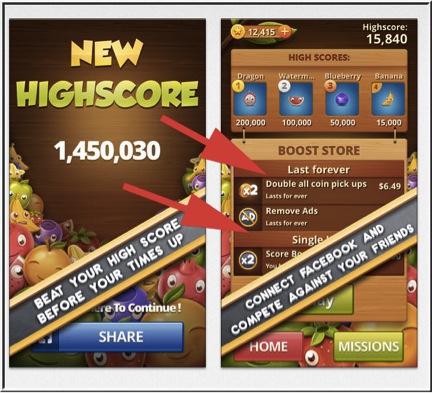 The above photo of a new gaming app in the iTunes App Store called “Fruit Station” gives us clues as to how some apps are earning money. Simply by looking at the screenshots of the game on iTunes, we can see the telltale hints of in-app purchase income via the “boost store,” which allows gamers to “remove ads” and “double all coin pick ups” for various amounts.

In-app purchases like these are what some developers call “clean” buys – money that the user (or their click-happy kids) intended to spend, proving they like the game at least enough to progress further. Devices like these are helping some app developers clean up in revenue, and are fascinating to witness when you can ferret out the actual income folks are making.

Here are a few app income reports from real people:

A good lesson to learn in the face of all the news about apps like “Make it Rain” making $50,000 per day is that there are still smaller developers like Walkabout Media, LLC making only $160.78 per month as of April 2014, even incorporating the method of re-skinning apps and utilizing in-app purchases.

Despite the “day of small beginnings,” it’s inspiring to see companies like this stick with it, because – who knows – the next app they release could be the one that blows that income amount out of the water.

“Fun fact – last week the in-app purchases from 3 of my apps made me about $70. The new monetization I’m doing made me $800,” wrote Carter Thomas, waxing nostalgic about how strategies like in-app purchases within gaming apps were dying.

But that was 10 months ago, and reading through the responses on that post shows both how fast the RevMob mentality can shift, along with fascinating comments from the maker of “InstaFit,” who earns approximately $288 per day off the app.

I love reading Thomas’ income reports. The most recent one shows that he brought in iOS app income of $1,170 in February 2014. Not one to rest on his laurels, the teenager also brings in a boatload of money from publishing Kindle-edition books on Amazon.

“The vast majority of my money comes from paid apps at the moment,” Thomas wrote in the comments section of that same blog post. Another lesson gleaned from studying his apps is that while some of his previous creations were game-like (such as the now seemingly defunct from the Google Play Store “Madlibs Generator”), the .99 non-gaming ones must be ruling the income roost.

So there’s a good and realistic peek at some real-life income reports from app makers. They might not be the $90,000-per-day earning top iOS apps – at least not yet – but viewing actual moneymakers in the trenches of the gaming app fields helps give us hope and perspective of the industry.