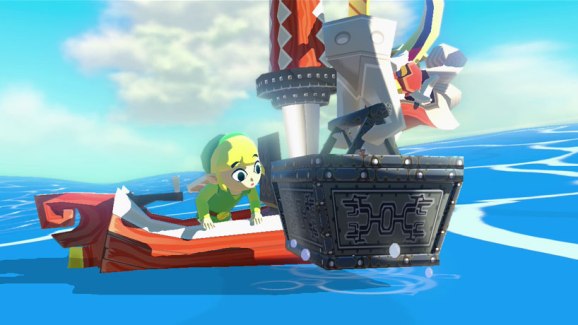 When I was a teenager, I avoided The Legend of Zelda: The Wind Waker simply because it wasn’t cool to like a game that looked like it was “for babies.” What had happened to the darker tone of Ocarina of Time or Majora’s Mask? Curse the little purple lunchbox — the name my friends had given to my GameCube — as it had ruined Mario and now Zelda!

Even as a young adult, I still wasn’t comfortable with Wind Waker. I couldn’t look past how childish the cartoon-like world made me feel.

Above: Nintendo took some risks with Wind Waker.

Fast-forward a decade or so. I’ve now bought Mario Kart 8 and, at the behest of my lovely wife, redeemed my free game — The Wind Waker HD, my old nemesis and her favorite game ever created. After weeks of Mario Kart 8, I’ve had my fill of single-player and wonder what to play on my suddenly popular Wii U when my friends are not around to join me. I relent and decide to give Wind Waker HD a fair shot. I’m a grown man playing Wii U in his boxers on the couch at 3 a.m. — what do I care if the game’s a little childish?

Oddly enough, I fall in love with the visuals this time. I can’t believe how much emotion I’m seeing from a Zelda series character. Previous Links would deadpan the death of his only relative while stoically journeying through dungeons to obtain the ultimate power needed to defeat the great evil plaguing the land, very rarely making me feel that this guy wasn’t just a borderline sociopath robot who just happens to be fighting on the side of good. This Link was still a silent protagonist, but game designers would do well to study how he conveys emotions and ideas without a single word.

Above: The face I’ve come to expect from my Hyrulian savior.

By the end of the game, I had shed a single, manly tear. As a man in my mid-20s, I had just realized something. Up until now, I had missed out on arguably the greatest Zelda game made to date simply because I was too immature to appreciate a different art style and wrote it off as childish. It’s a terrible shame, and I’m sad to admit it wasn’t just Wind Waker that this happened with. I look back and see amazing games that I missed out on before and now want to play, like Pikmin and Mario Sunshine.

An alarming realization is that other young gamers will make the same mistake I did. “Adult” and “mature” have become descriptive words that are now used as synonyms for good even if the game is of lesser quality. Young people want to be seen as adults and treated as mature even if they aren’t. This has lead to the influx of dreary, colorless worlds we see today — the era of the brown shooter.

Today, it’s easier to criticize Nintendo for rehashing Mario a few times per generation because it’s not “mature,”  disregarding the fact that the latest best-selling first-person shooter will dominate the market even though it’s essentially the exact same game as before thanks to the FPS equivalent of a Madden roster update. At least Nintendo does new stuff with Mario games for the most part, like adding new power-ups and jumps that greatly alter gameplay or introducing spherical platforms with changing fields of gravity (as in Mario Galaxy).

It’s a damn shame, but I guess those young people will have to learn the same way I did. For now, though, I think I’ll enjoy my new-found maturity by picking up a copy of Pikmin 3, getting excited for Yoshi’s Wooly World’s and Kirby and the Rainbow Curse’s creative art styles, and waiting as patiently as possible for Captain Toad.