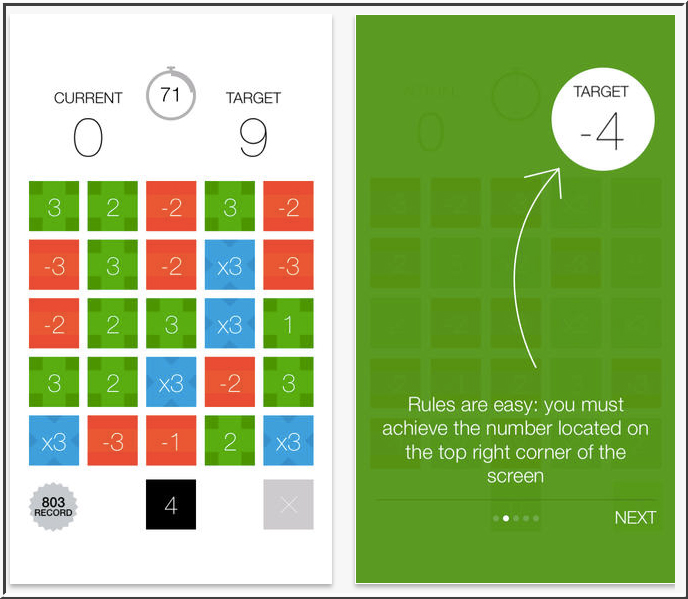 Perhaps it’s the sign of a great gaming app that I just played CalQ in my health club on my iPhone whilst working out on the fitness machines. I specifically chose strength-training apparatus that didn’t require my hands, so that I could hold my smartphone and test out my math skills at the same time I strengthened my quadriceps and toned my abductor and adductor muscles in my lower body. As I keep telling all you Venture Beat GamesBeat readers out there: I’m not even a gamer!

But there’s something about games that have the ability to improve the skills that we use in other aspects of our lives that make them seem like more than a game. CalQ fits that bill for its previously mentioned iOS version and its Android versions on the Google Play Store and Amazon.

The more than 45,000 (and counting) of us who’ve downloaded the game to give it a whirl have obviously found an intriguing reason to do so, and as I swiped across various squares in order to hit a “target” number that’s displayed on the top right-hand side of the screen while a timer counts down the seconds for the round, I thought of just how much the game could help both kids and adults alike who need to sharpen their addition, multiplication and subtraction skills.

For example, if my target number is 4, my eyes can quickly scan the screen of squares for any vertically or horizontally placed neighboring squares whose sum or product would give me that target number 4:

You get the picture.

Once you swipe across two correct numbers, those blocks move out of the way and make room for more, and a new target number is provided. You can keep going and improve your score as you choose either normal mode or “time attack” to up the challenge. Having those target numbers and the countdown clock is a great visual method of memorizing multiplication factors in a way that’s anything but boring, compared to the manner in which we used to learn.

Back when I was a youngster learning my multiplication tables at St. Edmund’s Parochial School in Chicago in the 1970s, there weren’t any personal computers around – only typewritten Photostat copies of multiplication tables to memorize ad nauseum. (For some reason, learning the multiplying products that involved the number 8 seemed the most challenging to me.)

When my children were toddlers, I thought it was cool when I found toys that would reflect certain multiplying formulas whose answers could be viewed when the child pressed down on the game’s physical button. Now, however, as time tests rule the roost in many schools – with teachers testing our kids on their ability to solve a large number of addition, subtraction and multiplication problems as accurately as possible within a limited amount of time – such as 60 seconds – it seems gaming apps like CalQ will become all the more popular.

Heck, the younger generation is already so used to grabbing their parents’ smartphones – or their own – and playing games on them. Why not make it one that will actually teach them how to balance their checking accounts one day?