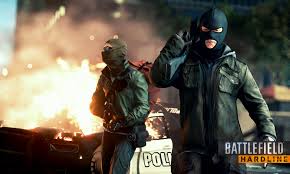 Games are like the materialized version of the developer’s imagination. It can take us to places beyond our imagination and create an immersive experience for us. With growing technology and development of various algorithms to produce realistic imagery and effects, playing games become very entertaining. Well, that is the exact motive behind it. There are several game engines such as Frostbite engine and the Unreal Engine which are the workhorses behind some of the popular game series like Battlefield and Tekken.

EA recently announced that there will be a new game in the Battlefield series called Battlefield Hardline. It is based off a completely different storyline unlike the previous other Battlefield games which revolved around the warfare scenario. In Battlefield hardline, it is not exactly a traditional warfare but rather an intense fight between the law enforcement authorities and a gang of robbers intending to loot a large sum of money. As a law enforcement person, you are supposed to stop the burglars and if you play it as the bad guys, you need to get away from the authorities and safely deliver the loot and escape the scene. Battlefield is known to have involved helicopters and vehicles before. The tradition continues in Hardline. Authorities have access to cars, bikes and helicopters. While thieves can also cross over to another skyscraper through a rope line. The gameplay is not exactly horizontal because the events take place in downtown Los Angeles which is apparently full of skyscrapers. Thus, it is more of a vertical game than horizontal. Just like all other Battlefield games, this one has the 32 vs. 32 multiplayer capabilities as well.

Another game to look for is Tekken 7 which was revealed at EVO 14. We saw it again at Comic-Con this year which was nothing more than an extended trailer. Tekken 7 will be based off the Unreal Engine 4. It seems that the story line has continued from the previous one. Looking at the trailer, we can see Kazumi talking about Heihachi Mishima. It becomes apparent that there is going to be an intense battle between Heihachi and the main villain. Last time we saw such intense battle between the two was during Tekken 3, long time ago. It seems like the story is going to get more interesting in Tekken 7 as the trailer tries to build the mystery towards the finale.

Another noticeable game which we should be looking forward for is Destiny. Bungie recently released the Destiny beta and it was closed just couple of days ago. The beta gameplay was smooth and it appears to be more inclined towards FPS, but it is not. Destiny tries to incorporate the goodies of MMO and RPG into an FPS package. We have seen such a case in Halo and somewhat in Borderlands. It does not appear to be something unique, but the gameplay is what sets it apart. Even during the alpha release the game worked exceedingly well even during the peak times and the beta almost did not have any flaws. All this comes at a high price. Destiny is set to be one of the expensive games of this year.

Now, on the other hand if you are looking for a game to play on your android phone and does not involve any fighting enemies then you should definitely look at Master of Craft. It seems like another CityVille or Farmville, but the gameplay is more similar to that of runescape or similar MMORPGs.