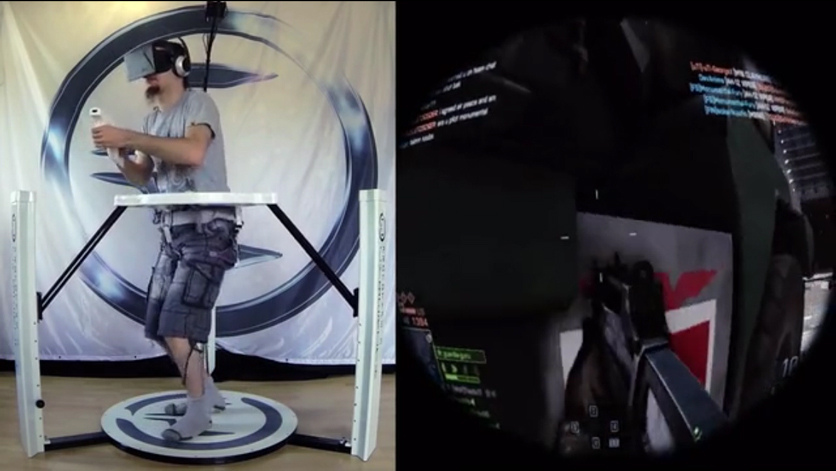 The impetus for this article came about when I asked myself, “I wonder what happened to that black, circular virtual reality gaming device that appeared on Shark Tank?” Turns out that sucker is called the Virtuix Omni, and even though all the sharks said “I’m out!” during the episode’s taping to the makers of the omnidirectional treadmill that helps get gamers up and moving even more throughout their gaming worlds, Mark Cuban ended up throwing his money into a $3 million round of funding in the end. As of April 2014, the company reported selling 3,000 units of the $499 treadmill – not bad for a cool $1.5 million in gross sales at that point.

While delving into research about the Virtuix Omni, I came upon its competitor, a similar but oh-so-different virtual reality treadmill called Cyberith Virtualizer. The immersive gaming hardware out of Austria is already gaining a bunch of buzz, and will no doubt blow through its $250,000 goal on Kickstarter, seeing as though they’ve reached $237,188 as of this writing with 29 days to go. One look at that sales video and I was sold on the sock-wearing pitch – and as I keep telling my readers, I’m not even a gamer!

That logic is neither here nor there. What really impressed me about the battle of these virtual reality devices is that we’re stepping into an undeniable part of the future, a precipice where futuristic games and their accouterments are actually poised to arrive on the doorsteps of the earliest adopters, those folks that like to ride the cutting edge in all its glory.

While certain aspects of these immersive games scare me – I mean, look at the way the guy can crouch down with his gun as if actually crouching down in a real-life scenario – they also excite me as well. Not the least of which reason is for the calorie-burning effect all these types of multidirectional treadmills will offer their users. After all, I am thinking of training for a bikini competition like this lady, Lucy, on Muuve, and new, interesting ways to lose weight tend to catch my attention.

Though my gaming son wonders if those Oculus Rift headsets will truly provide a 3D gaming experience whereby the screen looks as large as staring at his huge flat-screen HDTV, I see a totally different viewpoint of the virtual reality technology emerging on our shores. That future looks like a gaming world that continues to draw aficionados so deep inside a virtual reality world that real life will appear more like a shock when they take a break from gaming. If they can be forced away from their little circular treadmills, that is. Ah…it’s just like The Matrix come to life, leaving us wondering what’s real and what’s fake.

At least a good benefit from all these new virtual reality treadmills is that gamers will probably burn even more calories than my son does when jumping up and down from the low massage chair that serves as his gaming chair when he crushes his components “like a boss,” as I hear him scream from time to time.

As long as all those extra calories aren’t consumed with marathon pizza-eating sessions, the false notion of gamers always being overweight couch potatoes may definitely end up being done away with for good.