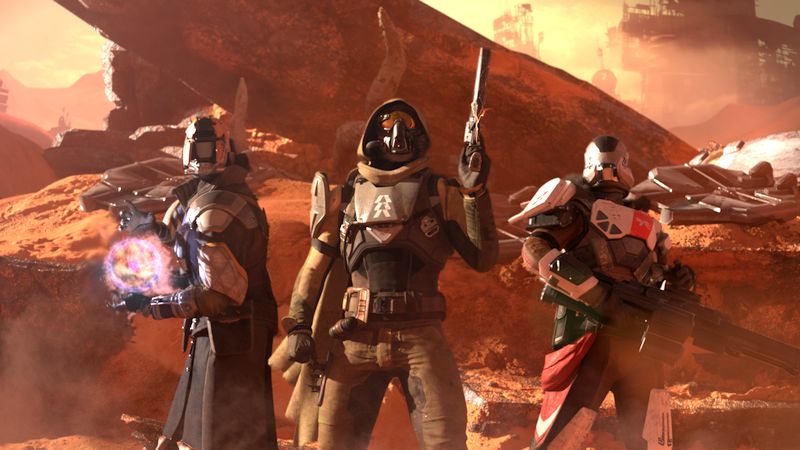 Bungie is no stranger to shooter fans. Although Rare is often given credit for setting the bar when it came to console-based shooters thanks to GoldenEye 007 on the N64 in 1997, the impact of Bungie’s Halo series on Microsoft’s Xbox has not only anchored itself across two generations but has also subtly influenced other shooters into following its lead on both PCs and consoles for better or worse. They’ve come a long way since Marathon and Pathways Into Darkness, so when murmurings of a new project from the House that Halo Built began stirring, anticipation began building to almost impossible levels.

It’s been a month since Destiny arrived and in which I’ve immersed myself in what was once only hinted at with fleeting glimpses of programmers at work, artwork, and awestruck interviews in the past few years. The title had also foreshadowed more than the protagonist’s future – it delicately touched on what may be Bungie’s biggest bet yet in their post-Microsoft world. Activision’s own Destiny also seems inextricably tied into their reportedly $500 million marketing bet in adding another money engine to run alongside Call of Duty.

In a weird sense of deja vu, Destiny also shares quite a bit in common with 1979’s Star Trek: The Motion Picture. Both promised much to their fans and both turned out to disappoint them in unexpected ways. Star Trek’s big screen debut was big on flash, special effects, and a lot of shots showing the crew staring at the viewscreen and not so much on developing said characters or the story. And in many of the same ways, that’s Destiny in nutshell.

“Why is any object we don’t understand always called ‘a thing’?”

Players act as “Guardians”, fighters who battle against a mysterious, sci-fi analog of “darkness” which takes the form of anything in the game that wants to kill you. A “Ghost” (voiced by Peter Dinklage) has found your remains, resurrected you somehow, and urges you to follow it, eventually taking you to The Last City where the remnants of Earth continue the fight beneath the shadow of the Traveler who had managed to fend off the Darkness at the cost of becoming an immobile mini-moon hovering over everyone’s heads. From there, it’s time to do some good by shooting a lot of things.

Destiny’s story, or rather, a disturbingly thin veneer of one, doesn’t offer a whole lot to chew on. There’s a theme, a vague notion of doing some good in a world on the verge of death, and that’s really all it leaves the player with aside from a few vague touchstones to pin down the whys and hows. 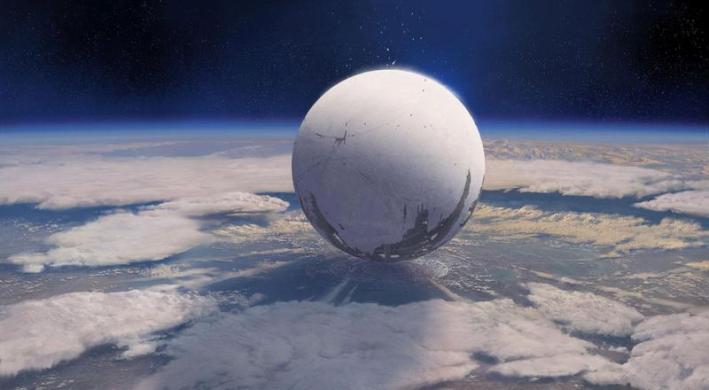 Above: Wondering what exactly the Traveler is? Or the details of the “great battle” that created the current situation? Keep wondering.

Part of the reason is that Destiny leverages the sense of “self-discovery” so heavily that your character almost falls back to the amnesiac hero. Interestingly, you can also go back as far as 1985 to find another parallel to the same approach with Activision’s Hacker, a game that gave the player little else other than the game disk and a few words of advice that amounted to saying that like in the real world, there are no instructions for this kind of thing. For actual hints on what to do, you had to request it by mail. Yes, with stamps and everything. At the same time, it provided enough mental candy to tantalize players’ curiosity at just what they had stumbled on.

It’s clear that Bungie doesn’t want the game to be “just another shooter” where story doesn’t really matter thanks to the effort that they’ve spent in creating an immersive world, but another stumbling block forces players to visit Bungie’s website instead of including the lore as, say, an in-game journal, encyclopedia, or even a visitable library. Not doing so seems to fall back on old habits especially in the face of other examples such from as Splinter Cell: Blacklist that keep the fiction closer to the controls. It’s too bad – the lore exposed by the card system is really worth reading to get a better taste of the world being built here. 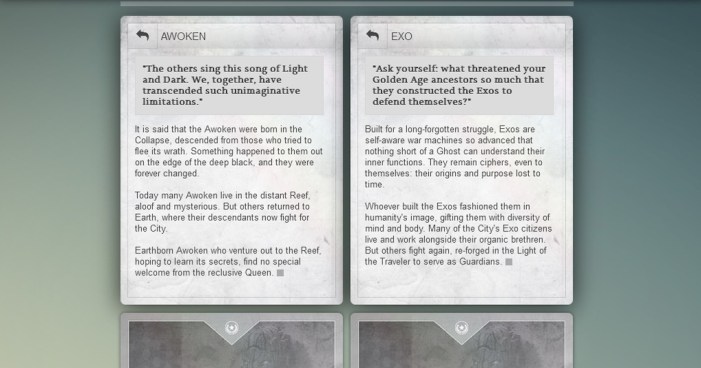 Above: Bungie’s online Grimoire tracks all of the lore that you unlock such as these writeups for the Awoken and Exo.

For every line that confronted me with blunt myth-building, part of me had also wished that the game came with something similar to the handouts given to theatergoers for David Lynch’s Dune in 1984 explaining the terminology behind what was being said onscreen. As a result, there’s no real connection to anything in the game other than this vague thesis that I’m there to do something good.

NPCs in the game fare little better coming off more as soundbites or glorified store fronts leaving the Tower something of a shell. It’s nice to look at and explore, but it’s about as utilitarian as a closet with switches. Finding out that sci-fi veteran, Claudia Black (Farscape, Diablo III, Dragon Age: Origins), is the voice of Tess Everis (the special orders vendor) was a big surprise. At the same time, I sort of hoped that she would have provided a lot more than the cursory greeting/farewell lines.

What the setting does particularly well, though, is in looking good. Or at least as good as it does on a PS3. Destiny’s world isn’t one, contiguous mass – it’s broken up into different areas that are, themselves, bounded on all sides by invisible walls of death that warn you if you wander too far. Destinations are selected by picking a planet/moon and then one of the hotspots (quests, strikes, or patrols) to descend from orbit to with different areas separated by connecting pathways that hide the actual loading being done. “Dungeons” are instanced to grouped players or just to you if you happen to wander into one (other players seamlessly disappear from your radar). Once you hit the ground, it’s really amazing to see it all come together without being interrupted by a load screen. 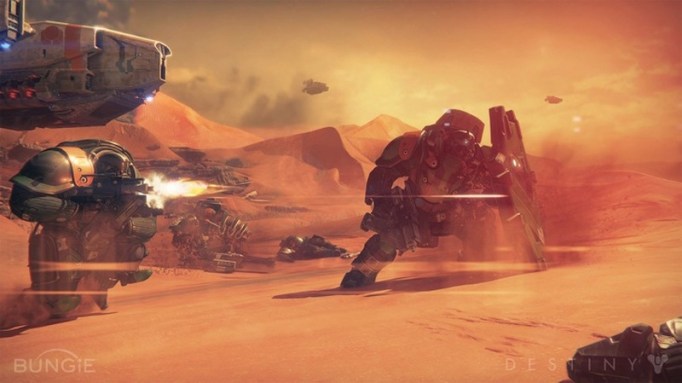 Above: Mars’ rusty sand and half buried cityscape beckon the player’s imagination before turning into a large series of cover locations which Destiny’s cannon fodder are really good at utilizing.

As ephemeral as the story elements are, the visual presence of the environments is striking, though even there, Destiny is its own worst enemy – the environments dangle possibilities before the player yet it never quite crosses the line beyond enemies and cover. Just what else was Clovis Bray into? What’s in the Venusian archive and can I take a look at some of what we found? Why do all of these caves/rooms off of the beaten path always consist of a short hallway and a space? And when those questions aren’t answered, I’m reminded that this is, in many ways, still another shooter.