“Enterprise, what we got back didn’t live long… fortunately.”

Bungie’s Halo expertise shows itself off best with the combat. Weapons feel appropriately powerful, easy to handle, and the addition of a loot system creates an admittedly addicting reason to keep blasting enemies in the hopes that they drop something neat. Even though we’re presumably far into the future in terms of centuries, or perhaps even a millennium or two, guns are still lead spitters right down to the manual loading of a heavy machine gun. Perhaps things have really gotten so bad that it’s all we had to work with.

An experience system also adds an additional reason to go out and wreck thousands of bad guys improving the personal class skills of your chosen Guardian. Players can pick from three types – Titan ( armored fighters), Hunter (sneaky and deadly), or Warlocks (magic-types). Every class can shoot as well as any other with their class skills (and appearance) acting to differentiate them. For example, my Warlock could shoot a rocket launcher, handle a fusion rifle, and use hand cannons with equal measures of lethality while being able to bloom miniature suns with his grenades, frying anything that came too close. 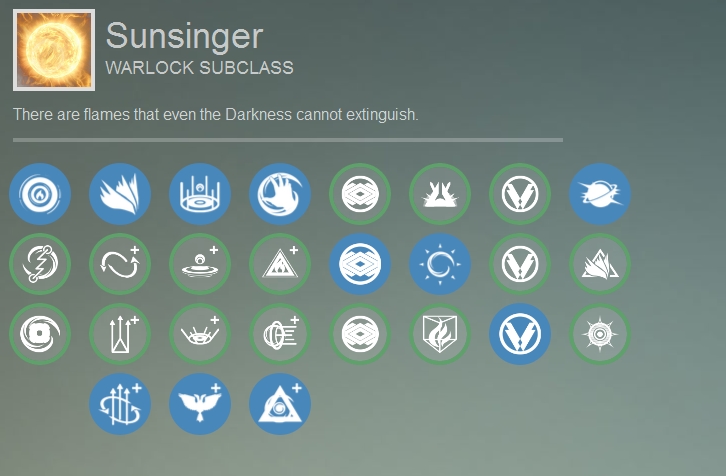 Above: The skill system unlocks additional options as you earn experience and you can freely pick and choose which skills you want to ‘activate’ as passive buffs/abilities, turning them on and off when needed on the fly.

There are also three races to start with – Humans, Awoken (blue skinned humanoids with bright irises), and the robotic Exo. They’re all for cosmetics, however, and have no impact on just how well your class actually plays out. Oddly enough, however, the only time other players can really look at how your character “appears” is at the Tower when no one else is wearing an obscuring helmet.

Leveling up to 20 runs the gamut of doing story-based missions, doing group “strikes” with automatic matchmaking for up to three in a party, and running patrols which are quick jobs in the wilderness whether it’s killing a certain number of enemies or finding a spot and standing there for a few moments while your surroundings are scanned. Don’t expect RPG-level puzzles, NPC quests, or anything remotely dialogue-worthy – it’s mostly go out and kill a lot of things. These are the equivalent of the “ye olde kill-the-rats quest” in Destiny.

It’s what happens after hitting 20 that the grind starts to manifest itself in pretty brutal ways. There’s no graceful way to say this – it can get pretty boring even though more things open up. Unfortunately, “more things” often means “more grinding”.

The patrol missions are quick, dirty shots of action that won’t drag the player into too much trouble though some might send them to parts of the map that they might not be quite ready for. The good news is that you can dump those without penalty. Dying, also, for the most part, has no penalty save for strike missions with particular modifiers in play such as kicking you back into orbit (where you can pick where you want to go) regardless of your progress.

The missions are pure action with some quips and lines thrown in for flavor by Peter Dinklage as your Ghost. Don’t expect a lot of story here, either, other than mixing truly alien venues inside the lines of medieval-like superstitions to build Destiny’s atmosphere. Though don’t expect much in the way of fiction, or loot, other than doing a lot of shooting.