“It knows only that it needs, Commander. But, like so many of us… it does not know what.”

I’m not going to call this Borderlands-lite. The implication gives the loot system far more credit than it deserves. There’s really not even a fraction of the kind of variety found here as there is in Gearbox’s cel shaded circus of firepower. It’s also as if the artists had stopped where your inventory began. 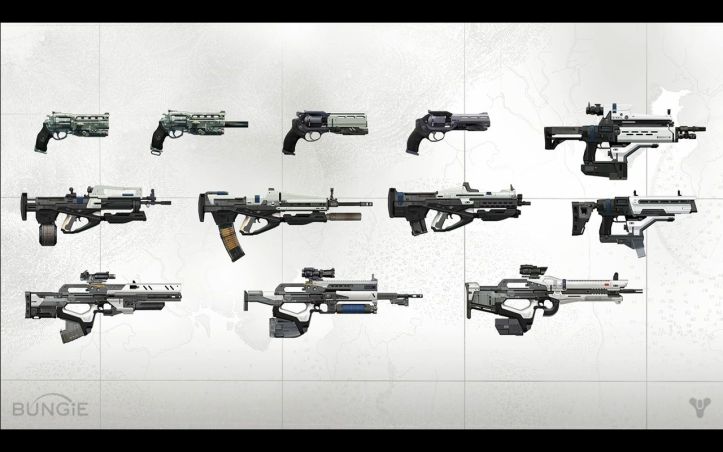 Above: Many of the gun-type weapons you’ll see in Destiny will look like these aside from color variations. The statistics aren’t that much better.

Aside from visuals, many weapons that I’ve found differ from each other in only the tiniest of ways with some dropping more than once with the exact same stats. The same issue extends to armor. One loot item that dropped during the recent Queen’s Envoy event, the Queen’s Guard Robes (for the Warlock), looks exactly like another piece of Warlock gear (Wrap of the Fatekiller) that you can get at the Tower from one of the faction vendors with only a few markings to set it apart.

A lot of things from the ships that you find at the vendor (which are only present in the travel cutscenes) or discover as rare drops in the world to the Star Wars-like “speeder bikes” used for ground travel share so many similarities with different models of each other that finding anything visually unique becomes akin to winning the lottery.

What is nice about weapons and armor, however, is that they can earn experience allowing players to upgrade them during the course of the game unless they move onto something else. The loot rating system for both, as the background color of their inventory tile, goes: beige (common), green (uncommon), blue (rare), purple (legendary), and finally, yellow (exotic).

Exotics, in particular, are super-rare and there’s an NPC in the game that only shows up for a few days before disappearing for nearly a week that sells them for similarly rare currency. Everything also has a chance to drop from enemies with exotics having the lowest chance of all. Drops other than green or white take the form of engrams that have to be decoded at the Tower by Master Rahool to determine what random item it might be. 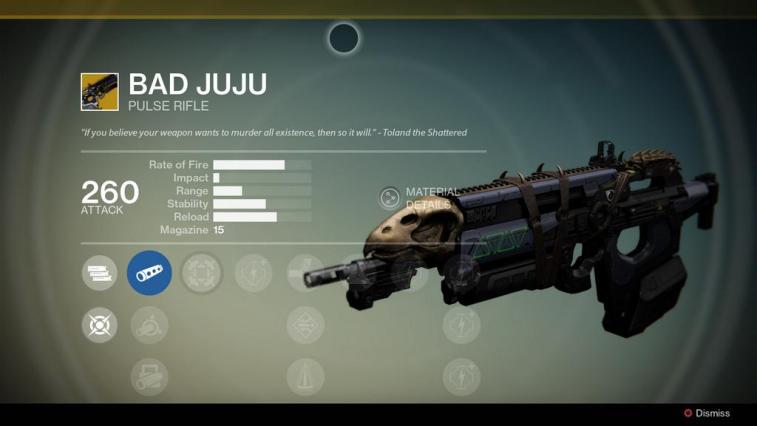 Above: Exotics can look very different from everything else that you have. Their stats, not so much. (image credit: Destinypedia)

Equipment is also rewarded for doing story-based missions and strikes which is nice as you’re making your way to level 20. Past that, however, there’s really no reason to go back and do any of them unless you’ve taken a bounty back at the Tower for additional rewards such as growing your rep with a faction. Although hitting 20 begins unlocking extra tough challenges and activities, it also introduces Destiny’s grievously boring grind to the hard cap of 30.

Past 20, levels are earned only through equipment with the “Light” attribute. The higher you raise this value by upgrading your armor (specifically your helmet, body armor, and boots), the more you creep up towards 30. Light-attributes start showing up on certain blue (rare) pieces of equipment, but legendary pieces have a higher Light potential with Exotics having the highest of all (though armor from the Vault of Glass matches those allowing players to hit 30 with enough pieces).

Players can only wear one piece of Exotic armor and wield one Exotic weapon at any one time just because, however. Couple that with the amazingly slow grind rate for drops and how social you may or may not be to find a group out there to team up with for the high level raids and strikes, and you could be in for a long, boring journey. There is no in-game matchmaking feature other than where it’s forced by certain strikes and as Bungie has said, this is intentional as was decision not to support voice-chat within the game (unless someone’s on your friend list).

Even boss enemies drop garbage most of the time like Black Wax Figurines or Ether Seeds which temporarily improve glimmer (the currency in the game) drop rates from specific types of enemies which, by the time I hit level 28, was pretty useless along with the massive hoard of upgrade materials like Hadronic Essence that beg for a crafting or barter system of some kind. Unlike the scaled immediacy of satisfaction that you might get from loot drops in titles like Borderlands/Borderlands 2 or even traditional CRPGs, Destiny’s system has scaled its drops to the worst side of grinding. 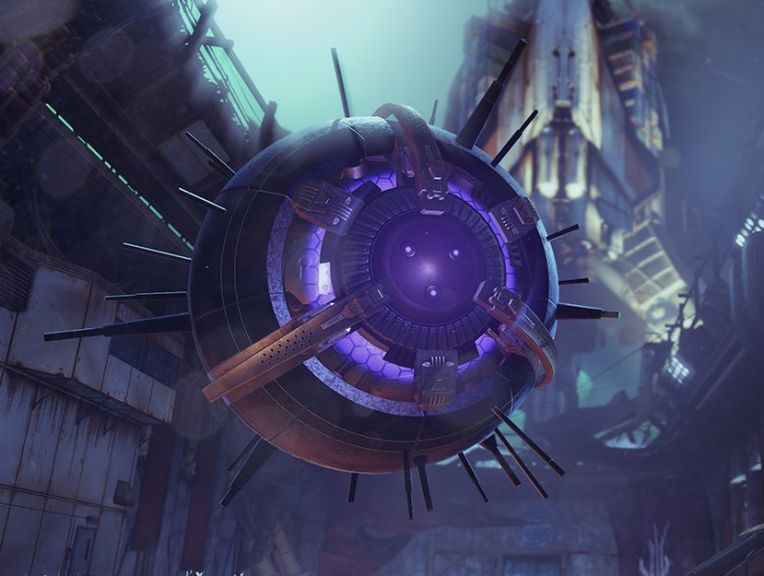 Glimmer has a hard limit of 25000, but the fact that there’s not a lot in the Tower worth spending glimmer on aside from cosmetics such as ships, name borders, etc.. or ammo packs might mean that you could be hitting it pretty often in your post-20 phase. I started buying ammo packs just to give me a margin for when I turn in items for glimmer to the Cryptarch that are dropped by bosses.

Though the recent patch has mitigated the loot drops somewhat to be slightly more forgiving (blue engrams sometimes awarded green items which infuriated players, and legendary engrams sometimes decoded into blue items) by tying the color of the engrams to their proper reward tiers or better, there’s still some work to be done – and not all of it because of issues that were around at launch.

One patch, for example, affected rewards during the Queen’s Wrath event where performing tough strike missions rewarded the player with a legendary piece of themed equipment (which didn’t look all that different from what was available). All legendary pieces of armor reward ascension shards when scrapped that were vital ingredients for upgrading legendary and exotic armor in the late stages. This ended after said patch, effectively killing any drive I had to keep doing any of these activities.

Vanguard and Crucible (the PvP portion of the game) “marks” are earned for participating in events related to either faction. There are other factions to earn marks for, but it basically comes down to doing activities that earning marks that can be used to buy legendary level equipment. Players are also limited to earning so many marks per week to spend on faction equipment but only if they also have a rank high enough to let them do that.

A strike list also unlocks past level 20, a run through leveled up strikes to earn Vanguard marks and reputation. If you’re grinding these merely for marks, the strike lists quickly become pretty redundant as an activity once you hit your weekly limit, though the recent loot patch made them a bit more attractive if you’re going after “Cryptarch Engrams” that have the potential to drop legendary engrams for loot.

As lightweight and flawed as the loot system is, it still serves enough of an effective reason to blow away legions of bad guys and mitigate the heavy repetition of its missions and side jobs. How far it feels it has successfully done that is up to the player on whether the snappy gunplay and the chance of loot is enough to curb the rinse and repeat of its mission maps, especially if you’re going at it solo.

What all this ultimately feels like is that Bungie has taken an almost surgical precision in controlling the relative power, progression, and scaling of its players to MMO’ish levels. Higher level content is heavily gated by additional restrictions that lack any subtlety.

“Right, now that we’ve got them just where they want us.”

Destiny also has PvP which earn Crucible marks for participating in matches against others in 6v6 or 3v3 match ups in domination, deathmatches, and its own version of headquarters across a small series of large maps. Crucible rep is also earned in the same way.

The Crucible is also a requirement for some of the exotic weapon bounties that rarely pop up while turning in others to the bounty master at the Tower. Exotic weapon bounties are chances to get a neat exotic (although “neat” is relative as some legendary weapons are arguably better than what a few of these particular bounties dish out) weapon to add to your collection, though the hoops they have you jump through embrace even more grinding.

Just as one example, players need to earn 500 “void” points in the Crucible by killing other players with weapons (or abilities if you’re a Warlock) with the void attribute for one particular weapon. Kills are worth 5 points but getting killed detracts 3 from the total. If you hate PvP, you’ll probably dump this quest and stick with whatever legendary you have on hand. 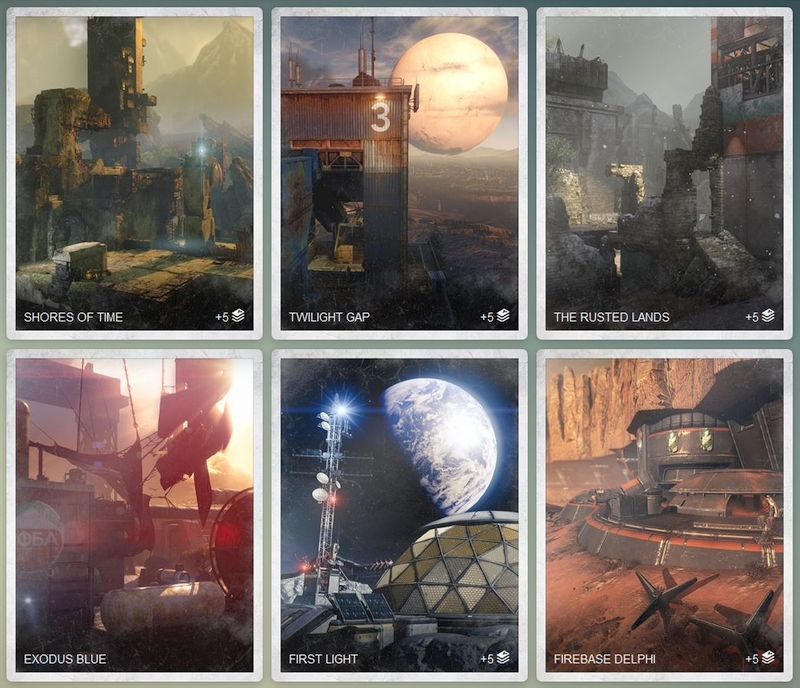 Above: Just a few of the Crucible maps taking players from Venus and Mars and back to the Moon and Earth.

On the whole, PvP can also sometimes feel wildly imbalanced especially if other players have some of the more exotic weapons. Even though it may indicate that level bonuses are turned off, I’m not sure that it does anything about the gear in question. As for the maps, they mix and match open spaces in with close corridors and narrow spaces where jump jetting through the air can both save your life and get the drop on a hard-to-reach flag on a platform above you. Rusted Lands on Earth features broken buildings, rusted stairs, and the spaces between them in a small slice of what used to be an industrial park. Firebase Delphi mostly takes place inside a mix of corridors and the internal spaces of a Cabal bunker on Mars. Those and other maps switch up approaches and architecture to try and keep players on their toes.

Movement across them feels fairly quick thanks to special abilities that can still be used (like the Void Warlock’s ability to initiate short teleports instead of jump jetting) and fights can get crazy when players begin throwing their special abilities around once those are fully charged. In a way, it feels a bit like Halo, only with superpowers and crazier weapons, and if that’s appealing to you, you might like this part of the game a lot more than I did.