Netgear said it has enhanced the Netgear Armor software with advanced security and threat detection for connected smart home devices.

The new generation of Netgear Armor comes with internet threat protection that users can install on their computers,  smartphones, and tablets at no cost beyond the existing $99-per-year subscription. This extra protection enables not only greater security at home, but as these devices connect anywhere a customer goes, helps keep them safe from viruses, phishing, and other attacks, even if they connect to unsecured networks at coffee shops or airports, for example.

“We have some updates that we made in our cyberthreat protection capabilities that we’re pretty excited about,” said Shalini Sengupta, product manager at Netgear, in an interview with VentureBeat.

The app for Armor gives you a personalized security score and tells you where your network and devices need more help. 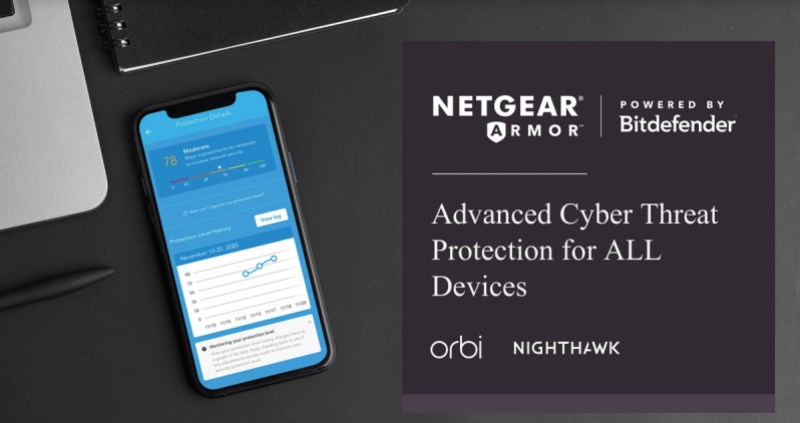 Above: Netgear is taking enterprise protection to its consumer products.

Powered by Bitdefender security tech, the newest version of Netgear Armor adds new privacy and advanced security options for home networks, which more people are using for both work and play. Smart devices on a home network are increasingly vulnerable, while attacks such as ransomware are on the rise.

“The number of all connected devices per home is increasing, and we’ve got an average typically of 25 internet of things (IoT) devices within the home,” Sengupta said. “Netgear Armor is a critical piece of our services solution. We’re seeing more users come back to us and understand they want to be more secure. They want their network to be secure and their devices to be secure.”

San Jose, California-based Netgear, which makes routers and switches, among other devices, wants to build more protection into the devices that use the network. Netgear Armor is built into most Orbi and Nighthawk routers. It provides a protective bubble for connected devices in a home network, helping consumers stay safe from hackers, malware, and viruses.

“We have an engine that was originally designed for the the enterprise, but because of IoT, we have put it into a consumer product,” said Alex Balan, security research director at Bitdefender, in an interview with VentureBeat. “We  have an enterprise-grade level of detection and protection in a consumer product.”

While about 80% of Americans have some kind of antivirus software installed on their computers, the 25 or more connected devices in a typical smart home remain vulnerable to threats that can provide attackers with a backdoor into home networks, leading to severe usability and performance issues as well as theft of sensitive personal data such as passwords, credit card information, and Social Security numbers. The IoT devices have proprietary operating systems, and they often don’t get security updates, Sengupta said.

“We felt like the natural move forward was to extend our technologies to the devices that plug into the Netgear routers,” Balan said.

Connected devices from different manufacturers increase the chance of not only incoming attacks, but also outgoing threats such as a home security camera trying to send data to a rogue site. To help thwart such threats, Netgear is adding new capabilities to its flagship security offering, providing simple and comprehensive network and device protection. 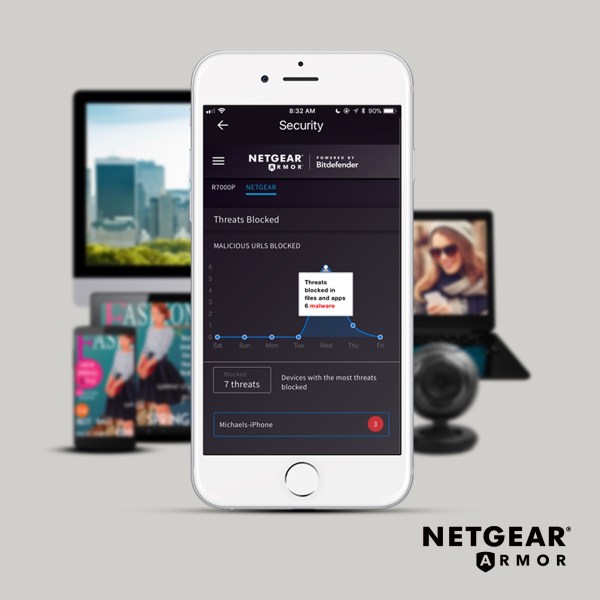 Above: You can protect all your devices with Netgear Armor.

Unlike traditional endpoint antivirus products, Netgear Armor is built into the router to monitor activity going to and from the internet, protecting the devices on your network and eliminating the need for — and the associated costs of — multiple security subscriptions or software.

Armor can provide sensitive data protection. It blocks attempts to send your login and banking info, SSNs, and more over unencrypted connections. If an application is trying to send that across the internet without your approval or knowledge, Armor can alert you to that, Balan said.

It also does anomaly detection, using machine learning algorithms to monitor and learn the usual behavior of your connected devices, and it blocks any activity that’s out of the ordinary.

“Most devices get compromised by brute force attacks,” Balan said. “If your device is exposed to the internet, it is going to be attacked via brute force.”

And it provides distributed denial of service (DDoS) protection, which protects your network against crippling denial-of-service attacks during which your internet connection gets flooded with bogus traffic. It also has exploit prevention/intrusion detection system (IDS). Armor protects your data and devices from malicious intrusions.