Amazon today disclosed that its subsidiary Amazon Web Services (AWS), a cloud infrastructure provider that companies use to run applications, brought in $2.4 billion in revenue for the fourth quarter of 2015. That’s a 69.37 percent year-over-year increase.

That growth rate is lower than it was in the prior quarter, when AWS posted a 78 percent increase in growth, according to today’s earnings statement. And the revenue figure matches the average of estimates from analysts at FactSet, which was $2.4 billion, according to FactSet. The raw AWS revenue figure has never been higher — in the third quarter it was $2.08 billion.

AWS leads the cloud infrastructure market. Competitors include Microsoft Azure, the Google Cloud Platform, and IBM SoftLayer. It’s unclear how far behind these clouds are, as their parent companies don’t disclose financials in the same exact way that Amazon does.

Here’s an updated chart showing AWS revenue growth in the past few quarters compared with the figures that Amazon disclosed previously to give investors a sense of AWS revenue, the “Other” category in North America revenue: 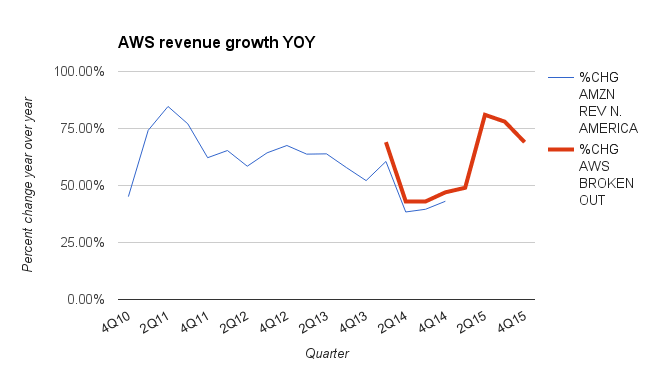 Above: Year-over-year revenue growth for Amazon Web Services. The blue line represents the “Other” category for Amazon’s North America revenue, which included AWS revenue, among other things.

Amazon stock was down more than 10 percent in after-hours trading. Find our full coverage of Amazon’s fourth quarter earnings here.

Update on January 29: AWS operating expenditures for the quarter came out to $1.718 billion, not $1.78 billion, as previously noted.