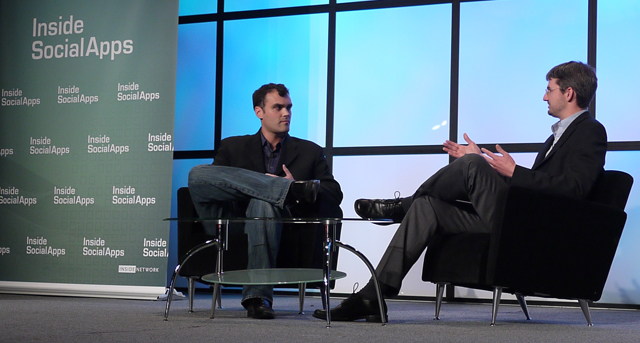 Facebook product chief Carl Sjogreen gave developers and others a few clues about what to expect from Facebook over the next year.

At the Inside Social Apps conference in San Francisco today, the Facebook executive laid out the three most important parts of Facebook’s third-party development platform: Open Graph, mobile, and games.

“The point of Open Graph is … to let apps deeply integrate with Facebook and fill out your Timeline and enrich the News Feed,” he began. “It’s based on the belief that Facebook is more interesting … if it includes more than just your status updates.”

Most importantly, he stressed, “What you’ve seen of Open Graph so far is just a small taste of the overall vision.”

As we saw with the launch of Facebook Actions, many applications are adding more color to users’ Timelines through graphically appealing summaries of activity from within the app. Pictures you share, miles you run, foods you taste, and more actions all appear in well-organized sections on Timelines all over the site.

That’s the kind of structure that Sjogreen said is vital to making Platform apps easier and more engaging, as well as getting more distribution.

In the past, he said, “You’ve had to have a PhD in Facebook to get value out of building apps for Facebook.”

Now, with more structure added via the Actions feature, “By simply taking the actions you do in that app and adding them to Facebook … that lights up the Facebook experience,” Sjogreen said.

“I definitely think there will be ways to optimize Open Graph in terms of the kinds of stories you generate and how they aggregate,” he continued. “We’ve created a dynamic where more structured information is more interesting.”

Developers, he said, can expect to do well on Facebook with third-party applications by “taking the activity in the app you’re building and letting users add that to their Timeline in a structured way… just make that communication channel work.”

Sjogreen went on to say that by giving Facebook “a more structured representation of the core activity within the application … we can turn Ticker and Timeline on (and whatever we come up with next) without a lot of extra effort.”

Again, Sjogreen stressed, what you’ve seen from Actions so far is just the beginning.

“We’re still figuring out all the right ways to structure data. But we want Open Graph to be a simple process for developers,” he said.

Games & mobile as growing parts of the Facebook ecosystem

Sjogreen also talked at length about the importance of Facebook-connected games to the overall platform, saying that for many millions of Facebook users, the games are what keep them on the site and keep them coming back.

“It’s critically important to us that games are successful,” he said. “There are some people who would find their Timeline incomplete without a lot of games activity.

In fact, games are so important to the Facebook audience, Sjogreen said, “We have a whole Platform team focused on just making sure games are going well. That includes building games-specific features … to create discovery for games.”

He hinted that new Timeline Actions or stories might be coming to better highlight achievements, high scores, and other gaming milestones.

Even so, games isn’t edging out other types of Facebook apps in terms of attention or investment of effort. “It’s absolutely not true that we’re investing in one at the expense of the other,” Sjogreen said.

Finally, Sjogreen turned his attention to Facebook’s mobile ecosystem, which he sees as a largely untapped resource.

“We have 854 million people using Facebook every month, and half of them are using a mobile device,” he said. “It’s one of the least understood parts of our platform, given that it’s so new, and it’s also the most underused opportunity.”

Previously, Sjogreen said, Facebook’s mobile tools were not at all fleshed out. “Platform on a mobile device just didn’t work,” he admitted.

As Facebook creates more and better ways for third-party developers to reach that huge audience of Facebook mobile users, however, Sjogreen and the rest of the Facebook team hope app developers will find equally huge success with the mobile side of Facebook integration.

“We want as many mobile apps as possible to find that Facebook is an integral part of their success.”