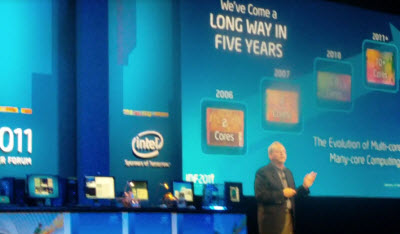 Intel is preparing to launch its first chip with more than 50 cores, or computing brains, on a single piece of silicon. The chip, code-named Knights Corner, will be released soon.

Justin Rattner, chief technology officer at Intel, made the announcement in a keynote speech at the Intel Developer Forum in San Francisco. Intel has researched such chips for many years, but it only has chips with a maximum of eight cores on the market now. Chips with dozens of cores are necessary, though, to keep up with the pace of Moore’s Law (the dictum that chip performance doubles every couple of years and the foundation for the economic growth of electronics) and advances in cloud computing.

Intel introduced its first dual-core chip five years ago. But the primary obstacle to introducing chips with so many cores in the past is that multcore chips are believed to be a nightmare to program.

“There has been a lot of angst about many-core programming, but those fears are starting to subside,” Rattner said. “You’d think you have to be some kind of freak to program these things. Our goal is to banish ninja programmers forever.”

Intel has helped ease the way by seeding its Knights Ferry software development platform to developers. It is approaching the programming of core as an extension to the way that single or small multicore chips are programmed today.

Intel is showing off a chip on stage today with 48 cores and plans to make a 22-nanometer chip with more than 50 cores in the near future. In a question-and-answer session, Rattner said that Intel might introduce Knights Corner in 2012. The chip could be useful in high-powered simulations such as programming virtual environments, educational simulations, financial modeling, web mining, media search and other tasks. A graph that Rattner showed suggested that apps such as home video editing and body tracking can be sped up as much as 60 times faster when running on chips with scores of cores.

Multicore chips on client computers could also help power future web apps. Brendan Eich, chief technology officer of Mozilla (and the creator of Javascript when he was at Netscape), said Javascript is the most popular programming language on Githhub, a social coding hub. He said that Javascript has been mostly sequentially programmed to date. But Eich showed off parallel computing extensions for Javascript — dubbed River Trail — that could run image processing at 15 times faster than a sequential Javascript version.

Rattner also showed that an LTE base station (for implementing 4G wireless data and voice service for smartphones) could be implemented with a multicore chip. Intel is working on research to do that on a “cloud radio access network” with China Mobile’s research arm.

Ultimately, Rattner said, many-core chips and parallel programming will enable a world with faster web apps with fancy video editing, physics simulation, 3D gaming, and more powerful mobile computers. It will also lead to more-responsive cloud services, improved PC security with real-time parallel cryptography, cheaper wireless infrastructure, and supercomputers that chain together servers that can be used by science labs such as CERN to do high-energy physics research on machines with 250,000 Intel cores.

Intel’s ultimate goal is to deliver a 300-fold improvement in power efficiency by 2018 with many-core chips. That means it has to deliver about 100 gigaflops of performance on about 20 milliwatts of power.

Intel showed a chip called Claremont that is a “near threshold voltage” chip. This chip gets a five-fold improvement in power efficiency and, in prototype form, can run on 2 watts of power.