Intel’s new generation of processors is nigh upon us, and it promises to be a doozy in several respects. The Santa Clara chipmaker today launched 11 new 10-nanometer 10th Gen Intel Core processors (code-named Ice Lake) designed for slim laptops, 2-in-1s, and other high-end mobile form factors. In addition to capable new integrated graphics and enhanced connectivity courtesy Wi-Fi 6 and Thunderbolt 3, the chips feature tweaks intended to accelerate task-specific workloads like AI inference and photo editing, as well as gaming.

Intel expects the first 35 or so systems sporting Ice Lake-U and Ice Lake-Y chips to ship for the holiday season. Several that passed the chipmaker’s Project Athena certification were previewed at Computex in Taiwan, including the Acer Swift 5, Dell XPS 13-inch 2-in 1, HP Envy 13, and Lenovo S940.

No matter which processor in the 10th Gen portfolio your future PC sports, its four cores (eight logical cores) paired with a 6MB or 8MB cache will support up to 32GB of LP4/x-3733 (or up to 64GB of DDR4-3200), and they’ll sip 9W, 15W, or 28W of power while clocking up to 4.1GHz at maximum Turbo Boost frequency. Each chip has 16 PCIe 3.0 lanes for external use, and their memory controllers allow for idle power states for less intensive tasks. 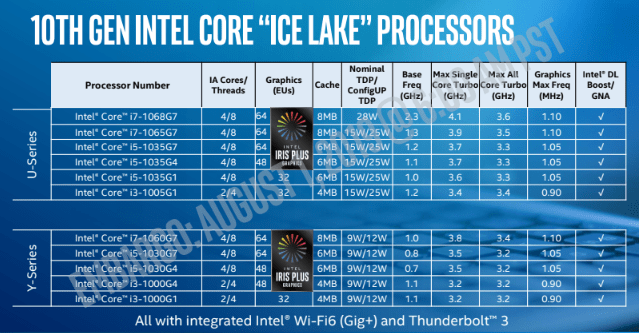 With respect to AI and machine learning, every laptop-bound 10th Gen processor — whether Core i3, Core i5, and Core i7 — boasts Sunny Cove cores with Intel AVX-512-Deep Learning Boost, a new instruction set that speeds up automatic image enhancements, photo indexing, media postprocessing, and other AI-driven tasks. It’s complemented by Intel’s Gaussian & Neural Accelerator (GNA), a battery-maximizing dedicated engine for background workloads like voice processing and noise suppression, and by Dynamic Tuning 2.0, which applies machine learning on top of Turbo Boost to predict workload and adjust power draw accordingly.

The 10th Gen lineup’s embedded Gen 11 Iris Plus graphics are no less impressive — Intel claims they deliver roughly double the performance of the previous generation at 1080p, thanks to 64 execution units clocked up to 1.1GHz. (Chips with lower-tier Ultra HD graphics top out at 32 execution units.) They’re the first to support VESA’s Adaptive Sync display standard and the first to incorporate variable rate shading, a rendering technique that increases rendering performance by applying varying amounts of processing power to different areas of the image. On machines that take advantage, Iris Plus natively supports the BT.2020 color space, which ranges billions of hues in 4K HDR.

Other Gen 11 features of note are support for two 5K streams at 60 frames per second or one 4K stream at 120 frames per second with a 10-bit color depth, plus two HEVC 10-bit encode pipelines and full compatibility with DisplayPort 1.4 HBR3 and HDMI 2.0b.

Intel claims that all this in practice delivers an overall clock-for-clock 18% improvement over the original Skylake designs, and an estimated 1.15 teraflops of FP32 performance or 2.30 teraflops of FP16 performance on the graphics side of the equation. That’s in addition to a 2.5 times AI performance advantage versus the previous generation and an eight times boost (when using DL Boost) compared with rival offerings, plus a 20% uplift for designs using Intel’s Adaptix suite of graphics-optimizing software. Even without Adaptix, the company says that content creation tools using HEVC can expect approximately two times faster encode on average with higher quality.

Improved graphics and AI performance aren’t the only enhancements of note. Intel says that increased board integration has already helped PC manufacturers incorporate features like up to four Thunderbolt 3 ports, six ports of USB 3.2 Gen 1 (or 10 USB 2.0 ports, or a mix of both) and Wi-Fi 6 via Intel’s proprietary CNVi interface link and controller, which delivers up to up to four times better performance than Wi-Fi 5 (previously 802.11ac) at 1Gbps speeds. A few tie in with Athena’s over 23 baseline requirements, which include things like nine or more hours of real-world battery life, a sleep-from-wake time of less than a second, a four-hour battery charge in 30 minutes, and “consistent responsiveness” when drawing from battery power as opposed to a wall outlet.

It might sound like a bunch, but Intel says today’s announcements only scratched the surface of the upcoming 10th Gen lineup. Toward the end of August, the chipmaker says it plans to unveil additional products tailored to multi-threaded “high productivity” and “commercial segments.”

“These 10th Gen Intel Core processors shift the paradigm for what it means to deliver leadership in mobile PC platforms,” said Chris Walker, Intel corporate vice president and general manager of Mobility Client Platforms in the Client Computing Group. “With broad-scale AI for the first time on PCs, an all-new graphics architecture, best-in-class Wi-Fi 6 (Gig+) and Thunderbolt 3 — all integrated onto the SoC, thanks to Intel’s 10nm process technology and architecture design — we’re opening the door to an entirely new range of experiences and innovations for the laptop.”