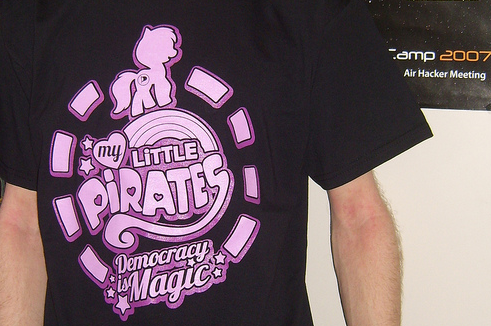 The Pirate Party began in Sweden back in 2006 as an offshoot of the BitTorrent site The Pirate Bay, with a focus on issues of copyright and technology. Now it has become a serious force in German politics, pulling ahead of the Green party in recent polls to become the third most popular political faction.

The rising strength of the Pirate party in Europe’s strongest economy is a sign of new concerns among young, highly educated voters who are unhappy with the country’s two major parties — the Christian Democrats (CDU) and Social Democrats (SPD) — who have dominated the political scene there much as the Republican and Democrats do in the United States.

The Green Party has long pushed a pacifist, anti-nuclear platform. “For many young people, the Greens have become an old party. The anti-nuclear theme just doesn’t lure voters like it used to,” said Manfred Guellner, director of Forsa, which conducted this latest poll.

The Pirate Party has been focused on hot button issues like ACTA, the SOPA of Europe. Copyright reform and internet freedom, especially as it relates to government censorship, have become major talking points for the Pirates. This has helped them capture the vote of many in the “informatics sector”, the German equivalent of our tech industry.