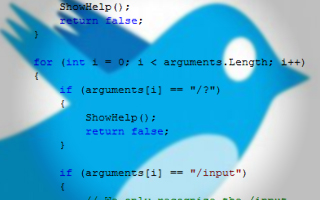 Today, Twitter gave developers a set of tools for getting web apps built and shipped as rapidly and cleanly as possible.

Called Bootstrap, the toolkit is a library of relatively simple but elegant HTML and CSS conventions for building web apps. In many ways, it’s similar to the CSS framework Blueprint.

Bootstrap doesn’t run on Twitter’s platform; the company just fostered its development and is now releasing it into the world.

As Twitter designer Mark Otto wrote on the Twitter developer blog, Bootstrap “uses some of the latest browser techniques to provide you with stylish typography, forms, buttons, tables, grids, navigation and everything else you need in a super tiny (only 6k with gzip) resource.”

Bootstrap will likely be a particular boon to the not-so-design-focused developer/entrepreneur who simply needs to get a great app live on the web in a short period of time.

The Twitter team says Bootstrap should be easy for any web designer or developer to implement, and once it’s compiled, Bootstrap contains CSS and CSS alone.

The toolkit is supposed to be great for cross-browser compatibility for modern web browsers — a constant concern for latter-day web designers and developers. Although Bootstrap doesn’t currently support IE 7 and 8, the team is working to correct that right now.

Bootstrap is built with Less CSS, a CSS pre-processor that extends the language with dynamic behaviors and runs on both the client side in modern browsers (read: nothing less older than IE 6) and on the server side with Node.js.

You can check out the particulars and some examples, and you can also grab all the code on Github. The Twitter developers are also asking for the help of other interested hackers to commit to Bootstrap and help make its footprint even smaller.

Otto notes that Bootstrap was originally an internal tool developed during Twitter’s first Hackweek. Now, Bootstrap is used across the board for all Twitter’s internal apps, of which there are many.

“With the help and feedback of many engineers, Bootstrap has grown significantly to encompass not only basic styles but more elegant and durable front-end design patterns,” wrote Otto. “This release represents our first public 1.0 release and the open sourcing of many months of hard work.”