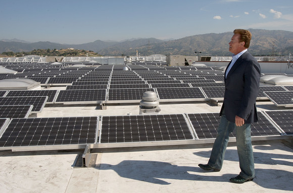 California is poised to meet its lofty renewable energy goals — at least on paper. Right now, 200 renewable energy products totaling 70 gigawatts of energy are under consideration in the state. Not all of them will pass muster — but their equivalent will need to be built in order to make the grade. That’s more than eight times the current 8,000 megawatts of renewable generation already in the works. Here’s the full list of projects that have been pitched so far.

Utilities are already scrambling to meet Governor Arnold Schwarzenegger’s mandate, requiring them to generate one-third of their energy from renewable sources by 2020. And not all the usual suspects qualify as renewable. For example, hydropower — accounting for 11.7 percent of California’s energy production — will not count toward these goals due to silting and environmental problems caused by damming rivers.

By the end of 2010, about 53 projects are expected to break ground — out of a pool of 250 that applied for grants under the U.S. stimulus package. The largest of this group is a 1,000-megawatt solar thermal development in Riverside County, Calif. Out of the top ten largest projects receiving government packing, eight are solar — indicative of the state’s preference for therm and photovoltaic solar generation. Only a handful of the 53 are wind plants, and only one is geothermal.

Of the projects not applying for recovery act funds, almost all of them are proposed to be build on land controlled by the federal Bureau of Land Management. Historically, the BLM has fewer regulations than other land management agencies. This could mean that more of these projects will actually get built, rather than getting bogged down in permitting disputes. Fortunately, this batch includes most of the larger projects, approaching a gigawatt in size.

Based on the sheer volume of proposals, and the impetus provided by state policy, it looks like California is getting ready for a big wave of renewable development in 2010. As the 2020 mandate looms, more projects will probably be pushed through that wouldn’t have typically made it by regulators.

As it stands, many utilities are looking to make power purchase agreements with out-of-state energy providers. In the next few years, this trend should shift — especially as well-funded solar projects spring up in California’s Central Valley and desert regions.