This post was written by  Andy Tian, CEO of Asia Innovations Group.

In Southeast Asia, while enthusiasm over Grab’s estimated $40 billion IPO still lingers, Indonesia’s newly-minted technology powerhouse GoTo Group is reportedly exploring an equally-sized IPO, adding buzz to an already hyped market. Meanwhile, India’s Paytm has also confirmed its IPO plan, with word on the street that it’s targeting a $30 billion valuation. Dlocal, the South American payment company, listed on June 3rd with an IPO valuation of $6 billion, and has since grown to a market cap of over $9 billion.

It’s about time too, as the current cohort of listed consumer internet companies in emerging markets has outperformed companies in developed countries by a long shot. 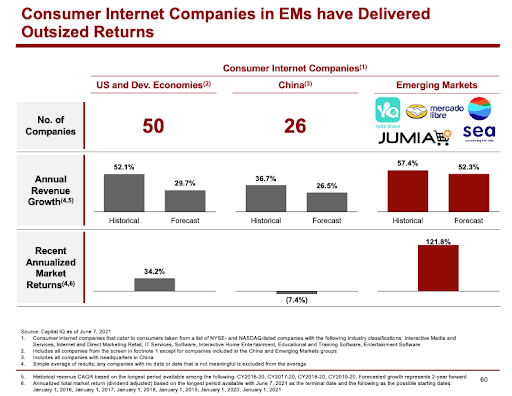 What’s behind the skyrocketing revenue growth of emerging market internet companies? The three main drivers in emerging markets are a mobile-only orientation, young demographics driving internet adoption, and the emergence of social as a core platform for cross-industry services.

With a total of 1.8 billion mobile internet users (compared to just 500 million in the US and Western Europe) and an aggregated GDP of $36.4 trillion, emerging markets are charting an unrelenting and underestimated rise, almost entirely on mobile internet. Driven by a combination of cheap high-speed mobile broadband rollouts, fast-paced digital adoption, and continued economic development, this mobile ecosystem is creating a tremendous number of remarkable opportunities.

Most Western companies talk about “mobile first”, but for emerging markets, it’s “mobile ONLY.” For most users and families, the smartphone is the only computer and communication device they have. A Pew Research survey of 11 countries across emerging markets found that as of 2019, 54% of internet users in these countries were going online without access to a computer or tablet in their household. That’s compared to only 15% of American adults who are “smartphone-only” internet users as of 2021. Across emerging markets, a huge portion of the population is dependent on mobile connectivity to access online activities.

High mobile dependency in emerging markets points to the rise of mobile “super apps,” which represent many of the unicorns coming to the public market this year. Apps such as GoTo and Gojek are capitalizing on the leap straight from offline to mobile infrastructure in emerging markets.

Part of the magic formula can be attributed to the young demographics concentrated in these regions. Across emerging markets, young people are driving post-pandemic economic growth faster than the rest of the world.

According to Pew Research, young people in emerging markets are far more likely to own a smartphone than older generations. Thus, they are the primary engine of growth for the digital economy.

The very young demographics of these regions have led to a buzzing social media scene, where the mixture of live video, audio, and dating elements, or so-called “live social” products, is becoming a daily fix for young people. As 5G adoption and mobile internet connectivity accelerate, young people across the emerging world are moving online to quench an exuberant desire for social interaction.

Social as the interaction platform of choice

With accelerating mobile adoption among young people across emerging markets, it’s only to be expected that social platforms are emerging as an interaction platform for a variety of services. For example, the explosion of live video ecommerce in China is now making waves across emerging markets. Livestreaming ecommerce is hitting its stride in Southeast Asia, where Alibaba-backed unicorn Lazada reached 27 million active livestream users in April 2020, contributing to a 45% month-on-month spike in its gross merchandise value.

With the perfect storm of mobile adoption, young demographics, and a growing preference for social as the platform of choice, 2021 may be the year of coming of age for emerging markets, but their adulthood is only just beginning.

Andy Tian is Chief Executive Officer and Co-founder of Asia Innovations Group (‘AIG’). He oversees strategy and growth for the company. A successful serial entrepreneur, Andy started his tech career in Silicon Valley. He co-founded one of the world’s earliest social app companies in 2008 and sold it to Zynga in 2010 when it became Zynga China. Andy subsequently served as General Manager and led Zynga China’s expansion. Andy was also an early member of Google in China. He established the company’s mobile business and introduced the Android operating system to China in 2006. Before this, Andy worked for BCG, where he delivered business strategy consulting services to Chinese mobile carriers and banks. Andy holds bachelor’s and master’s degrees in Computer Science from MIT.