The myth that Macs aren’t welcome in the enterprise appears to be finally dying out, according to new research from Forrester. The company reports that almost 50 percent of businesses in North America and Western Europe now issue Mac computers.

While the focus of many “Apple in the enterprise” headlines focus on iPad business adoption, Mac computers are seeing surprisingly strong adoption numbers too.

Forrester’s new report, titled “Apple Infiltrates The Enterprise And Reshapes The Markets For Personal Devices At Work” surveyed more than 3,300 IT professionals in North America and Western Europe and found that 46 percent of enterprises were issuing Macs to employees. Those employees receiving Macs tend to be “senior in rank, higher paid, younger, and in emerging markets,” and managers are much more likely to have Apple products than regular employees. Notably, only 36 percent of small businesses reported issuing Macs in 2011, and that number is stagnant from 2010.

Overall, Forrester believes Microsoft’s dominance in the enterprise is quickly coming to a close. With Apple penetration rising and Microsoft posting minuscule mobile numbers, Microsoft is losing one of its strongholds. The one area Microsoft will continue to hold onto is productivity software. Its Office software is available on both Macs and PCs, and employees prefer it over any other productivity software option. 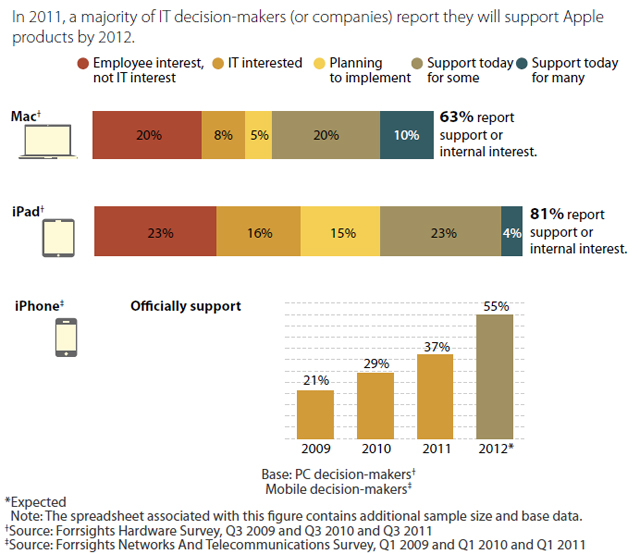