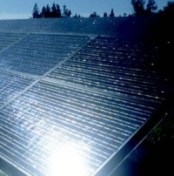 Predicting a three-fold growth in the solar industry in the next four years, analyst firm BCC Research has released a report with detailed predictions for some specific sectors of the solar market.

Cleantech has gotten plenty of press lately, with pundits predicting both booms and busts. Venture investment in the overall sector grew 48 percent year-over-year to reach $2.6 billion in 2007, as we recently reported.

BCC estimates that the world market for solar photovoltaics will grow at a third that rate, averaging about 15 percent each year until 2013. However, some specific technologies will see stronger growth than others.

Thin film cell manufacturers such as Nanosolar and Heliovolt, for example, will grow some 45 percent each year. Use of multicrystalline silicon in standard photovoltaics, meanwhile, will grow at 285 percent annually, rapidly taking over the market share of more efficient, but also much more expensive, single-crystal silicon.

Altogether, the various categories of solar photovoltaics are projected to ship about 13,274 megawatts worth of cells valued at over $32 billion by 2013, up from 2,875 megawatts last year valued near $13 billion. Over time, cell prices will fall, and revenues from the cell sales will grow less slowly than volume.

Those are all strong growth numbers, and with all the hype around solar cells, it would be easy to expect much more. However, there are a number of variables that will affect how quickly the solar market can grow.

Supplies of multicrystalline silicon for solar cells are projected to remain painfully tight through 2008, which will mean high prices for silicon-based solar cells–a boon for thin-film manufacturers, who offer a way around the currently limited supply of solar silicon.

Meanwhile, the entire industry is threatened by shifting governmental subsidies. A separate study by Thomas Weisel Partners, also recently released, suggests that 2008 will be a “black hole” for solar companies, as the governments of several countries (including the United States) decided whether or not to prioritize the technology.

A Scientific American article we recently mentioned also suggests a need for subsidies, citing the figure of $420 billion over the next four decades.

The above factors foreshadow a solar industry shake-out. In all likelihood, some part of the growing herd of solar startups — which drew $3 billion in combined venture capital and private equity investment in 2007 alone, according to yet another study — will be forced to fold or restructure in the coming year.