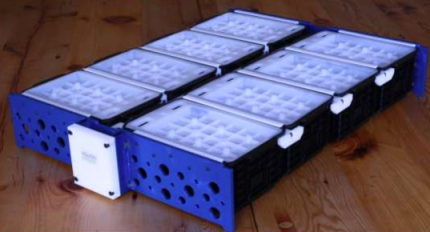 Aquion Energy, a maker of sodium-ion batteries that can store large amounts of electricity, has raised $20 million of a roughly $30 million round that includes Kleiner Perkins Caufield & Byers and Foundation Capital as investors, according to a regulatory filing with the Securities and Exchange Commission.

The company is finalizing its term sheets for the remaining $10 million of the round, which should be closed sometime later this week, Aquion Energy’s vice president of business and market development Ted Wiley told VentureBeat. He confirmed that Foundation Capital and Kleiner Perkins Caufield & Byers participated in the round.

“Everybody is just going through term sheets,” he said. “It’s not a question of if, just when it clears all the legal hurdles.”

The company creates batteries that can operate at a wide range of temperatures (between -10° C and 60° C) and use sodium ions rather than lithium ions to carry a current. The batteries cost less than $300 per kilowatt-hour of electricity stored, compared to between $500 and $1,000 per kilowatt-hour of electricity found in most modern lithium-ion batteries. The batteries are designed to last for more than 5,000 cycles — running from a full charge to a full discharge.

Aquion Energy strings the batteries together into arrays of 8 or more batteries that carry 15 volts. The company can also stack those arrays together in a circuit in series or parallel configurations to create a battery fixture that carries 100 volts. Aquion Energy plans to introduce strings that can carry 1,000 volts by the fall.

Batteries like those produced by Aquion Energy are useful because they can store electricity generated by non-conventional sources — such as wind turbines or solar panels — and release the electricity gradually. That helps alleviate strain on a power grid that might be overloaded if too many sources of energy feed electricity into the grid all at once. The batteries can also release additional electricity in peak-demand times, such as hot days or in the future when there are thousands of electric car chargers on the grid.

“We are electron source agnostic, these are batteries for any kind of grid, any stationary energy storage,” Wiley said. “We would be interested in telecom backup markets, off-grid renewables, all the way up to peak shaving and grid-level services.”

The company has raised $5 million from a mix of Kleiner Perkins Caufield & Byers and a loan from the Department of Energy. It has a production plant in Pittsburgh, Pa., that is producing demonstration models of the batteries. The company plans to create a high-volume production facility sometime next year that will produce enough batteries to store 500 kilowatt-hours of electricity.