AT&T announced today that it will open its wireless network to smart meter maker SmartSynch, allowing electric utilities to install its IP-based smart grid technology in even more residential areas. Every SmartSynch SmartMeter will now send energy use information to utilities and homeowners over the expansive AT&T network, saving millions of dollars in network infrastructure, expansion and maintenance costs.

Now any consumer with AT&T service will be able to understand their energy consumption in economic terms, encouraging them to cut down on unnecessary use, especially during peak periods. There are several companies and tools that provide the same information — Tendril, Greenbox and soon Google PowerMeter, among them — but AT&T claims its new system will increase the speed and efficiency of communication between meters, homeowners and utilities.

“This is the first announcement of a major network provider really getting into the smart grid business, and AT&T is the largest wireless provider in the country,” says SmartSynch chief executive Stephen Johnston. “Hopefully this will encourage other businesses in the IP-based communication space like Motorola, Qualcomm and others to get involved.” He cited mobile phone applications that allow users to remotely monitor and adjust home energy consumption as a key area for expansion. 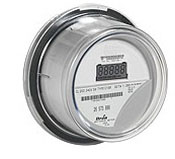 The wireless giant says it chose to work with SmartSynch because it’s the only company that offers end-to-end smart grid intelligence on any device (cell phones, computers, etc.). Plus, it already works with the decade-old smart grid company to connect meters in commercial and industrial settings with more than 100 different utilities. This new move is essentially a big bet that the residential smart meter business will take off in the next several years — but it’s also a fairly safe one, considering the billions of dollars the recent economic stimulus plan has earmarked for smart grid expansion. President Obama himself has urged the installation of at least 40 million smart meters in homes across the country.

AT&T has had its hat in the smart grid ring for a while but has more plans in store. On top of these efforts, it says it has also cemented useful relationships with U.S. utilities by providing them with mobile applications that track fieldworkers, detect power outages and remotely monitor electrical systems. These connections could come in handy as it deepens its involvement in the smart grid’s rapid evolution.