Ausra, an ambitious Silicon Valley company wanting to build a solar thermal electric power plant double the largest ever built, has raised somewhere north of $40 million in a first round of capital.

However, just as Ausra was preparing to make its announcement Monday that it has applied for a permit to produce a record 175 megawatt plant, its Oakland Calif. competitor, BrightSource, stole some of the thunder late last week by saying it has applied to build a larger, 200 megawatt solar plant and two smaller ones.

The Ausra investment is significant, though, because it’s the largest best so far made by Khosla Ventures, the firm started by successful venture capitalist Vinod Khosla. Khosla has made dozens of investments in the area of green technology, but the size of his bet on this technology reflects his enthusiasm for the Palo Alto, Calif. company, he said. He invested $25 million of the total.

Another top venture firm, Kleiner, Perkins, Caufield & Byers, joined in the investment too.

Solar thermal is different from photovoltaics, the popular technology used for residential solar power. Ausra’s solar thermal technology uses large mirrors, made of steel and glass, to concentrate the sun to heat water into steam. (See Forbes’ explanation of how the two processes are different). Ausra’s process drives a turbine with the steam, to generate electricity. Notably, the energy can be stored in pressurized tanks, so that electricity can be generated day or night. The electricity can also be transported for long distances. In an interview, Khosla and Executive Vice-President John O’Donnell told VentureBeat that if a 92 square mile region of Nevada were covered with the technology, Ausra would be able to fulfill the nation’s entire electricity needs. (They are actually half-serious about this being a possibility, pointing out that much of Nevada’s land is owned by the federal government. Only 10 percent of that land would be needed.)

The technology has been around since the 1990s, when Ausra’s founder David Mills, conceived the idea at Sydney University, and worked on it with scientist Graham Morrison between 1995 and 2001, but Ausra was formed late last year. Khosla and Kleiner Perkins’ Ray Lane met with the company and moved it to the U.S from Australia.

The idea is to help California utilities meet requirements to install 17 gigawatts of clean power by 2020. 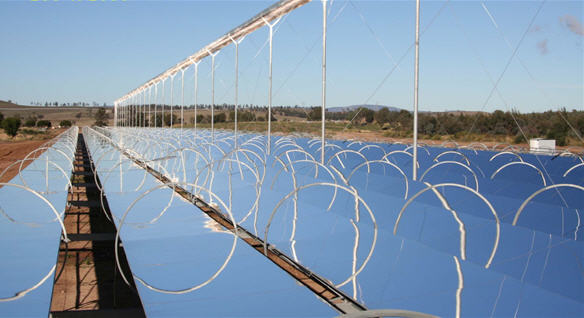 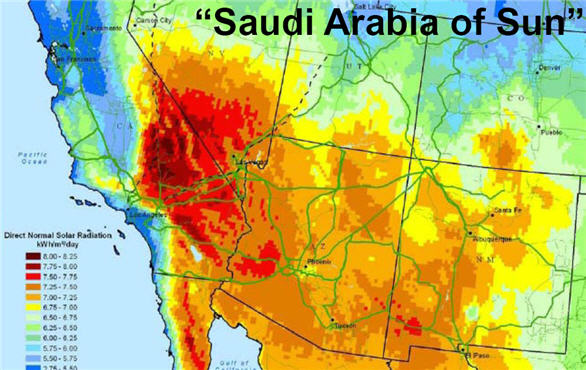 Among Ausra’s competitors is Brightsource, formerly named Luz II (which we covered here), backed with $30 million from VantagePoint Venture Partners and others. The difference is that Ausra has cut the cost of producing the solar reflecting mirrors — making them on a mass production line, in return for slightly less efficiency, says O’Donnell. (Here’s a Pdf presentation about the company, including a look at its technology.) Ausra said it wants to build a 175 Megawatt plant, more than twice as large as the reigning champ, an 80 megawatt plant in the Mojave desert built in the 1990s.

Other players include France’s Acciona Energy, which recently raised $266 million in debt-and-equity project financing facility to cover the capital costs of constructing a 64-MW solar thermal plant in Nevada (see overview here), and Seville, Spain’s Abengoa Group, which has built a plant in Europe. There are several other smaller players, too.