Ask nearly any physicist if it’s possible for a hydrogen atom to enter a lower energy state than the ground, or resting state they hold in nature, and you’re likely to get an unequivocal “no.” But a tiny company in New Jersey called Blacklight Power has been disputing that assumption for over a decade, and of late, making gadfly claims that its founder says will overturn the accepted scientific order.

To a regular person, of course, disputes between physicists are boring at best. But Blacklight’s claims have a special significance: If they’re true, that means there’s a source of cheap, clean energy that can be easily tapped anywhere in the world. And rather than attempt to convince the world with calculations, Blacklight now says that it has physical proof in the form of its energy generator, verified by an independent university lab.

It’s difficult to get one’s hopes up, though. Scientific history is littered with ambitious, revolutionary theories that turned out to be groundless. But Blacklight is an interesting case. Its “hydrino” theory isn’t put forth by a single crackpot. Instead, the company employs a good handful of high-level scientists who would presumably rebel if the idea was totally false. It has also taken over $60 million in venture funding. Despite a hearty rejection by the scientific mainstream, and being ignored for years on end, its founder, Randell Mills, has plugged on. We covered the company extensively back in May, when it started saying it had a prototype 50 kilowatt reactor.

At the time, Mills was reluctant to provide much proof, saying only that the process was being verified. Now an engineering team at Rowan University, also in New Jersey, has come forward with results from its own tests of the Blacklight process. Tests conducted in sealed chambers, and measured with a device called a calorimeter, show a heat reaction from a substance provided by Blacklight far beyond anything anticipated.

Blacklight is providing the Rowan researchers with a common industrial form of nickel called Raney nickel, which is then put through a reaction with water to produce energy. “We’ve been able to regularly reproduce these results and we believe any research lab could do the same,” Peter Jansson, the faculty member heading the experiments, told me. 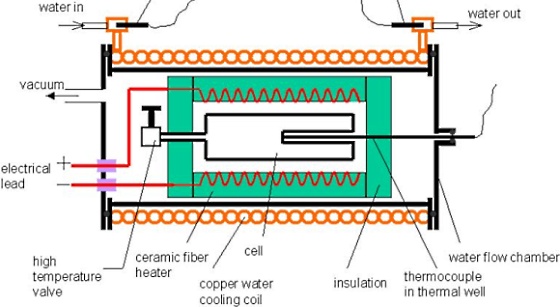 There’s one odd factor in Jansson’s tests, which is that Blacklight supplies the Raney nickel, which it in turn obtains from an industrial supplier. When I asked, Jansson wasn’t sure what, if anything, Blacklight did to prepare the material, but Mills was happy to tell me in a separate interview that it’s doped with a very small amount of another common material, sodium hydroxide, in a process that others could replicate.

Jansson, for his part, said that the chemists on his team who analyzed the material couldn’t see any clear way that Blacklight might have rigged the tests by somehow storing energy in the Raney nickel. “It would be rather difficult to do this quantity of heat storage chemically in this material,” said Jansson. “We would have seen significant changes.”

It should be noted that Jansson has been aware of Blacklight for years, and even acted as an advisor for an energy company that ultimately made a strategic investment, but it appears to have no unethical ties, just an ongoing interest. Jansson also professes to be impartial to the existence of hydrinos, saying he’s interested in hearing any “alternative explanation” to the hydrino theory. Mills, for his part, says that he’d like for scientists to independently verify every step of the process, from obtaining the Raney nickel and doping it to the calorimeter tests to prove that the energy bursts really exist. The information needed to run those tests is free to the public, he says; the only thing required is a researcher willing to take the time to puzzle through the process.

Unfortunately, the reactions Jansson’s team is observing produce only a quick burst of intense heat. In a commercialized process, there needs to be a steady output. Mills says he has purposefully kept knowledge of how to loop the reaction within the company, so that his own researchers can remain a step ahead in their work on the 50KW reactor the company earlier announced.

According to Mills, it’s likely that a totally independent researcher will verify the whole process within a year. Meanwhile, the company will start licensing out its energy process, and do work with hydrinos in various chemical applications. 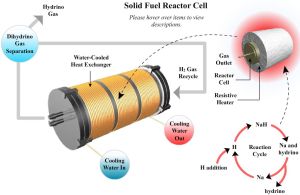 As I noted in May, it would be odd if Blacklight were a complete sham for Mills to place himself in an end game in which he would be definitively proven wrong within just a year or two. So there does seem to be something deeper here. Physicists will still deny the hydrino theory, and they may be right; perhaps that’s why there was a distinct note of smugness in Mills’ voice as he said, “The controversy and academic debate won’t stop commercialization.”

What evidence there is, Mills calls “totally unequivocal,” although it seems prudent to wait for more independent verifications to emerge for what Mills himself calls the most important energy breakthrough since the discovery of nuclear power.

As always with this sort of story, readers are encouraged to add any extra perspective they have in the comments. For those with the right background, Blacklight’s latest paper on its process is here.