Blacklight Power, a company founded by a Harvard medical doctor called Randell Mills, says it can push hydrogen atoms into a state that most scientists deny exists.

The company claims that energy this atomic push releases can create electricity for a single cent per kilowatt hour, less than any known process, including burning cheap, dirty coal. The company says it can do so with a non-polluting, self-perpetuating process that mostly feeds itself with common water.

Breakthrough of the century, or glorified scientific scam? I’m not sure, but most companies with claims this big are produced in a crazed inventor’s basement — and stay there.

Blacklight, by contrast, claims $60 million in funding, including about $10 million from electric utilities Conectiv and PacifiCorp, as well as amounts from unnamed hedge funds and members of its all-star board of directors, including Shelby Brewer, a Reagan-era US assistant secretary of nuclear energy, and Michael Jordan, CEO of Electronic Data Systems.

Some history: Blacklight’s process was discovered in 1991 by Mills, who claimed that he’d found a way to produce a molecule called a hydrino, which is a theoretical form of the hydrogen atom in which the electron has entered a lower orbit — meaning the atom itself contains less energy. Mills decided that he could not only produce hydrinos, but also capture the energy released during the transition from hydrogen, using it to generate electricity.

When the hydrino is created through a reaction between hydrogen and a catalyst, according to Mills, it lets go of more than enough energy to fuel electrolysis in common water, thus producing more hydrogen. The excess energy — the majority — would go to producing electricity. The only outside ingredients needed are a catalyst, to turn the hydrogen to hydrinos, and heat (which would also be generated once the reaction had started). And the hydrinos created by the process? They’re non-reactive and can be released to float up into space, as they’re lighter than helium. Or, even better, they can be processed into unique chemicals with a range of useful applications. 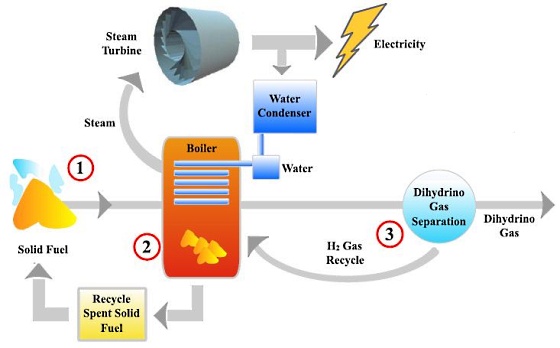 Unfortunately, the resting state of hydrogen is the lowest energy state ever demonstrated, and quantum physics doesn’t accept that hydrogen could be pushed to a lower state; therefore, most quantum physicists declare the Blacklight process is nonsense. Most members of the scientific establishment aren’t even willing to look. Douglas Osheroff, a Nobel-winning physicist at Stanford, put it to me rather succinctly: “People understand the hydrogen atom probably better than anything else. We know the electron around the hydrogen atom is in a 1s [minimum] orbit. [Mills] can claim there’s a lower energy state, but I don’t think you’ll find anybody who’s willing to pursue it,” he said.

For fifteen years, the scientific controversy cropped up occasionally, until 2006, when VentureWire ran a lengthy story on Blacklight raising $50 million from private investors. Afterward, the company fell more or less silent, with the exception of scientific papers released by Mills and others, and an updated version of his book, The Grand Unified Theory of Classical Physics.

Earlier this week, the company suddenly broke its silence — this time with an announcement that it had not only mastered the hydrino, but had built a prototype reactor capable of generating 50 kilowatts of energy, for the outrageously low cost of one cent per kilowatt-hour. Coal, at its very cheapest, is more expensive than that; and, for comparison, the most efficient forms of solar generation are struggling to reach 10 cents per kWh.

Intrigued, I got on the phone with a company representative, who asked not to be directly quoted, but who confirmed the claims. In a separate email, Mills said that the breakthrough had come about a year ago, with his invention of the catalyst. Making an announcement today, he said, came from a “business decision to be more transparent to facilitate validation and business development.”

Blacklight’s claim, then, has shifted rather dramatically, from pushing science only a quantum physicist could argue against, to — at least according to their own accounts — showing off a physical process to electrical utilities and others. A prototype plant in New Jersey will be complete in 2009, and the technology will be licensed out, they say. Meanwhile, the company is scaling the process to plants larger than 50KW.

That all seems pretty farfetched, but the company reiterated to me that Blacklight has raised a very significant amount from hedge funds and private investors, and has a board full of notables. For confirmation, I was directed to Randy Booker, a physics professor at the University of North Carolina. Booker, who said Greenpeace had asked he and another faculty member to evaluate the technology in 2005, has been to the Blacklight lab in Cranbury, NJ several times to validate the process.

Booker told me over the phone: “They put in energy, and the yield is about 50% more than what they’re putting in. I’ve also validated their scientific methods, and it seems like they’re doing everything right, from the measurements to procedures.” He adds: It’s nothing small or miniscule, it’s very obvious.” What Mills has come up with is a “new, revolutionary theory” that can go beyond quantum physics, Booker concluded.

Conclusive? Not really, at least in my view. There’s little chance a journalist will unravel a scientific controversy in its second decade. However, what’s interesting is that it seems Blacklight has put itself on the path to final validation, or failure, within the next couple years. Theories are difficult to kill, but a power-generating process is fairly easy to prove — does it release energy, or not? Booker, for his part, says he hasn’t seen the 50KW reaction, but did see a smaller two kilowatt demonstration.

And while scams are common on the small-cap public stock exchanges, Blacklight isn’t publicly traded and doesn’t appear to be looking for money, which raises the question of why it would claim a nonexistent commercial process. On the other hand, if the process is real, only a public demonstration is likely to convince its opponents.

But, just in case any scientists want to dig in, the full list of Blacklight’s scientific studies is available here; the most recent is entitled Commercializable Power Source from Forming New States of Hydrogen. And although Mills has had trouble claiming patents in the past, two are listed as granted on the USPTO website: 7,188,033, on rendering the chemical bonds of hydrogen, and 6,024,935, on methods for releasing energy from hydrogen atoms. Readers are welcome to speculate.

Update: See my October 2008 post on independent testing of BlackLight’s process by a university lab for more detail and, in the comments, more controversy.