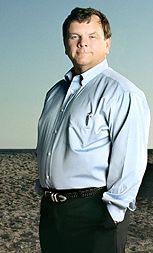 Terry Tamminen is the former top environmental advisor of California governor Arnold Schwarzenegger, and is also former secretary of the California Environmental Protection Agency (EPA). He has a reputation for having “turned Arnie green”.

Tamminen left his post as permanent advisor in 2006 but says he still advises Schwarzenegger as well as the governors of Florida, Maryland and, Minnesota, on the renewal of environmental legislation. Tamminen also has a role in venture capital: He sits on the advisory board of San Bruno-based venture capital firm Vantage Point Venture Partners. He is also an operating advisor for Connecticut-based private equity fund Pegasus Capital Advisors.

I talked with Tamminen at his office in Santa Monica about some hot topics in making California greener.

VB: The plan to build a high-speed train to Northern California has given rise to a lot of pro- and con opinions, as we’ve covered. What do you think about the plan?

TT: It’s a great idea. I’m not sure if it’s a best use of public money, though. The first line is said to cost about $40-50 billion. If you take that amount of money and divide it between some big cities that need mass transit, like Los Angeles, San Diego and San Bernadino, you’ll probably do much better in getting people to use mass transit. The government could encourage the high-speed train with smaller investments and help private investors by giving some land and speeding up the permitting process.

VB: What are the best ways for the government to support using solar power and other renewables?

TT: Californian renewable standards have to be federalized. According to our renewable portfolio standard, 20 percent of the energy in California has to come from renewables by 2010, and 30 percent by 2020. If we had that at the national level, it would spur all kinds of renewables. Then the investors would know that there will be a demand for the product, whether it’s wind or solar power, or something else. Some financial incentives wouldn’t hurt either, because we have been subsidizing fossil fuels for so long.

VB: California is considered the leading state on environmental issues in the US, but there has been criticism that the reforms to make the state greener are not proceeding as quickly as they should. What do you think?

TT: The evidence is very much that we are the leading state. The average American uses 12,000 kWh electricity per person per year, while the average Californian uses 6,700. The policies take some time to become successful. In 2006, when the governor signed the global warming solutions act, we were at that point the first state to have that kind of legislation. Today, there are 28 states that have plans and seven that have put them into law like we have. Several more will do so this year, so by the time the new president takes office in January 2009, the majority of the US population will live in a state that is doing what it would do if it was a separate state under the Kyoto accord, and that’s largely due to the Californian leadership.

VB: Will California reach its goals to cut greenhouse gas emissions by 20 percent by 2010?

TT: We will be a little late, by maybe a year. That’s better than anybody else in the US. Edison’s territory in Southern California is about 16 percent; they’re going to be the closest. Northern California is at about 10 percent. There has been an effort, but one problem is, we don’t have the transmission lines. For example, we have a number of solar thermal projects in the desert, but we don’t have the the transmission lines to get the energy into the city where it’s needed. Rooftop wind and solar plants would solve part of the problem because they don’t need transmission lines. The most important thing to reach the goal is energy efficiency. Even if you have solar and wind power and hydrogen vehicles that emit nothing, it takes time to get those things into the marketplace. Energy efficiency takes place immediately and reduces greenhouse gases.

VB: Which one of the three presidential candidates (McCain, Clinton or Obama) is the best on environmental issues?

TT: Any of those three would make a much better environmental president than the one we have today. So far, Clinton and Obama are tied in terms of the policies they have stated. Obama gets a slight edge for making it more of a campaign issue, because it’s not just who has the best policy, but who gets to work on the issue the quickest. It looks like that would be Obama. He has done some major policy speeches on energy and on environment, and speaks about the issue much more urgently. For him it would be an issue he would tackle in his first couple of months as president. For Clinton, it might take place in the normal course of governing. McCain was visionary and ground breaking five years ago, but time has passed him by.

VB: What’s the next big thing in clean tech?

TT: There’s no silver bullet, only silver buckshot. Instead of sticking to one thing that then turns out to be unsustainable, as happened with ethanol, you have to cast a wide net. It’s not about becoming perfect all at once, but taking one step at time. For example, I’m advising a company called iGPS that makes plastic pallets for shipping. They weigh less than the commonly used wooden ones, so they consume less fuel in shipment. Forty percent of our hardwood is chopped down to make pallets, and they are not as durable as plastic ones. There’s nothing high-tech about that, but it has a great benefit for the environment, and a great business model as well. But the next big things could be, for example, algae and solar-electric paint.

VB: Do you think you’ll make a fortune in clean tech?

TT: I certainly hope so. I sit on the boards of a few companies I try to guide. I think if in 1980 you were talking to Bill Gates and asking about Microsoft, you couldn’t imagine what would happen in next 20 years. That’s where we are today in clean technology.

VB: How should the federal and state government support the use of electric cars?

TT: I’m not sure if electric cars are better than hydrogen or biogas cars. Our transportation fuels are based on petroleum, and we’re not going to move from petroleum to a single other source, because there’s not going to be enough of that other source. Governments shouldn’t be picking winners and losers, they should support battery, electric, plug-in electrics, hybrids, hydrogen, and natural gas cars. There should be subsidies to develop these cars, as the government already supports the oil industry with a hundred billion dollars a year.

VB: What is the biggest obstacle to protecting the environment?

TT: It’s fear. Any kind of change scares people. If you’re in the fossil fuel industry and you see the changes coming, it’s hard to get your head around them. You lobby to keep things the same. Habits are difficult to change, but it’s possible. Four years ago they put buses here called Metro Rapids. They only stop once each mile, so it’s like a subway. They expected 15,000 people a day to use that line on Wilshire Boulevard. On the first day they had 55,000 people, and the ridership rises with the price of gas. The buses run on natural gas or hydrogen, but everybody said that nobody would use them.

VB: What is the difference between your message and the message of Al Gore?

TT: I’m very disappointed in him. With the film Inconvenient Truth, he got the message out there that there’s a problem. Everybody gets that, and now people are hungry for solutions. And his latest thing is that he is going to spend $300 million on an ad campaign to tell people once again there’s a problem. I’ve told him that we should start talking much more about solutions, what individual people, governments and nations can do for the environment. In 2005, when Schwarzenegger signed his executive order and set California on its current path, he said “The science is in, the debate is over. It’s time for action”.

VB: Who are the people you are listening to?

TT: People like Warren Buffet. With Berkshire Hathaway, he has a great way to invest in value, in companies that make real things. That’s a great metric when you look at the clean tech revolution. Look at the companies that make something people need. Government policies will help drive people towards those products. When the periodical gas shortages start to appear here, the genius will be the one who has managed to develop liquid gas from algae.