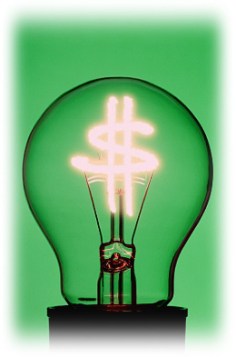 California’s biggest utilities all have major smart grid strategies in the works vying for a chunk of the federal stimulus bill’s $4.5 billion earmarked for revamping the country’s electrical grids . And these plans surpass the roll-out of residential smart meters that most people think of when they think smart grid.

Companies like Pacific Gas & Electric, Southern California Edison and San Diego Gas & Electric are all working on lower-profile grid projects like storage-minded microgrids that could deliver power even during blackouts . They are refining demand-response systems designed to offset grid-destabilizing loads, and some projects are meant to monitor how electricity is traveling through suburban power lines. All of these factors are vital to a system that reduces overall power use and charges consumers more accurate and fair amounts for the energy they use.

The Department of Energy has been pretty tight lipped when it comes to how the stimulus funds will be divided and distributed — though some preliminary guidelines have said grants will be limited to $20 million per smart grid project . While this may be enough for some of the less sexy projects mentioned above, its probably too small an amount for ambitious smart meter deployments. California’s three top utilities plan to install 11.2 million smart meters across the state in the next several years, an effort that will cost a very pricey $11 billion to pull off. This means public attention — and venture funding for that matter — will probably, and somewhat surprisingly, shift away from metering to demand and monitoring-oriented technologies.

San Diego Gas & Electric is taking the lead in many of these areas, with chief engineers highlighting microgrids, demand-response mechanisms and consumer-end price monitoring as top priorities in addition to metering. If alerted in real time to how much electricity is costing, especially during peak periods, consumers stand to shave up to 15 percent off their current electricity bills. And they’re not the only ones benefiting. All of these developments could save utilities a bundle by reducing grid disruptions, maintenance costs and personnel demands.

Improving grid communication systems and flexibility also opens doors to appliance-based opportunities. Small investor-backed companies like Trilliant and SmartSynch are working to hook regular household appliances into smart grids. The upshot of these projects is that major power sucks like dryers, furnaces and refrigerators could one day be programmed to adjust their energy use based on necessity and peak periods. Taking it a step further, it could soon be possible for even laymen to turn off their pool pumps or turn down the temperature in their homes remotely from their phones based on how much electricity is costing them at that particular point in time. This is the goal of

companies like Tendril , which already has its own iPhone application capable of monitoring consumption.

Another area for development that has received little fanfare is the integration of wind and sun power into electric grids. Southern California Edison may be spending more than 80 percent of its $1.5 billion smart grid funds on metering systems, but a good portion of what’s left over will be used for renewable energy projects. Storage poses the most pressing challenge when it comes to alternative sources, with researchers and engineers alike rushing to devise systems that retain the most power possible when the sun isn’t shining and the wind isn’t blowing. With more emphasis being placed on smart grid, solar and wind, this is one area where technology may progress by leaps and bounds by 2011.

But in order to make any of this a reality, utilities will need to work together — and with the smaller enterprises looking to piggypack on their efforts — to adopt consistent standards. That means technology developed by various utilities will need to be able to speak the same language going forward. There are no government regulations enforcing this need, but some states — California among them — have moved to provide significant financial incentives for utilities to comply with interoperability requirements. Then again, incentives could be synonymous with threats, as one of the ideas on the table is to withhold federal funding from companies and smart grid developers who don’t agree to adopt universal protocols.

In the meantime, it seems like all parties involved are holding their breath, waiting for the federal funding to rain from the sky and change their fates. But not a dime has dropped, nor has the DOE or the administration clarified the whos and hows and whens and whys surrounding the money. It will be interesting to see if the $4.5 billion really is the game changer everyone expects it to be once it becomes a reality, and if so, what strings will be attached .