Most websites rely on third-party integrations, be it analytics, video players, ad-tracking pixels, or chatbots. While such tools are usually integral to its business model, the more scripts a company adds to its code, the bigger impact it has on the website’s performance.

This issue isn’t new, of course, but it has emerged at the forefront of the web development world in recent times, partly due to Google’s so-called “core web vitals,” which are metrics it deems critical for optimal web browsing experiences. Speed and responsiveness are central tenets of Google’s blueprint.

With that mind, a new Y Combinator (YC) graduate is emerging from stealth today with a mission to expedite page load times using a single line of code. To help, it has secured $2 million in seed funding from a slew of backers, including YC itself, Twitch cofounder Kevin Lin, Pico Partners, and Stormbreaker VC. 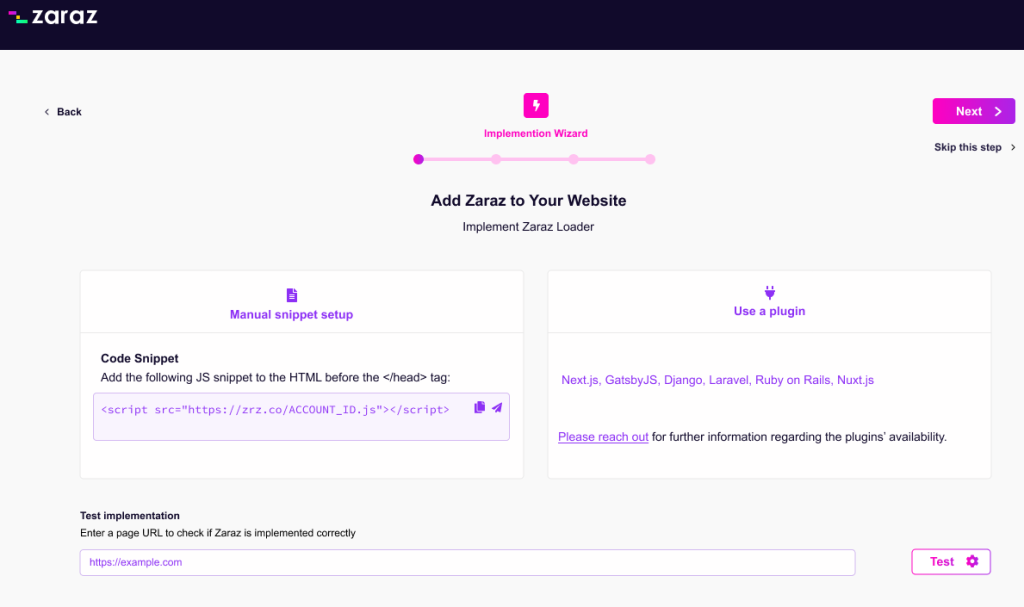 Above: Zaraz: Adding a single line of code using the Zaraz implementation wizard

Founded out of San Francisco in 2019, Zaraz identifies all the third-party tools that are running behind the scenes on a website and connects to the service itself through the server-side API. This frees the user’s browser from having to download and execute potentially dozens (or more) of scripts, speeding everything up. 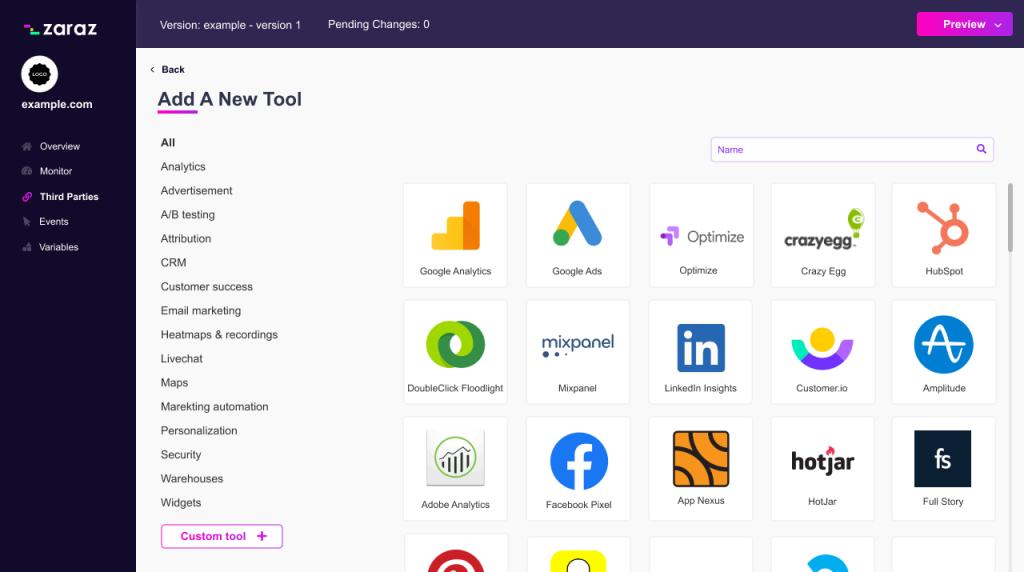 This is important for several reasons. This coming May, Google is rolling out an algorithm update that will factor in a website’s page load speed when determining search rankings — if your website’s load time is akin to a snail strolling through treacle, you could lose online visibility. But more than that, web users get frustrated if they have to wait even a couple of seconds longer than they’re accustomed to, meaning that Zaraz could reduce churn and increase revenue.

This is particularly important in the current climate, with ecommerce booming due to the global pandemic. “Companies with a high volume of traffic care a lot about page speed,” Zaraz cofounder and CEO Yair Dovrat told VentureBeat. “They know that milliseconds make millions, and they usually calculate how much a 100-millisecond improvement is worth to them. So when we speak about an acceleration of a few seconds, they’re immediately hooked.”

It’s not just ecommerce websites that stand to benefit from page speed enhancements, of course; any consumer or enterprise company stands to benefit from shaving even a second off each webpage’s load time. And with Google’s algorithm update looming, organic search traffic will hinge on its performance.

Other notable players in this space include Google itself, which offers Tag Manager, a free tool for managing and deploying marketing tags (code snippets) on websites or apps. According to Dovrat, most of the current tag management products serve their users with scripts that evaluate and load the third-party tools in the browser. Zaraz, on the other hand, not only handles it all in the cloud, but it aims to support all third-party tools, whether or not they have an available API. Plus it adopts a hybrid approach for tools that can’t be loaded entirely in the cloud.

“Zaraz is a server-side environment executing third-party code that you have 100% control over,” Dovrat said.

Digging down into the nuts and bolts of what exactly Zaraz does reveals that the platform doesn’t give each third-party tool the same treatment. After all, each integration serves a different purpose, and sometimes loading in the browser might be necessary for the function it’s designed to perform.

“Each tool is different, but the concept is to run whatever we can on our backend instead of in the browser, leaving it to focus on loading the customer’s website,” Dovrat  said. “While other solutions serve all website visitors with the same script and then evaluate it in the browser, we do this on our backend.”

For analytics tools such as Mixpanel or Google Analytics, for example, Zaraz can fully “cloud-load” the script by communicating directly with the tool’s API, and the website owner can still track user-behavior as intended. For conversion pixels and remarketing tools such as Google Ads or Taboola, Zaraz adopts a “cloud-render” approach to deal with the third-party cookies that are required for tracking ad engagement, which typically need to send information from the browser. “This is a unique solution we are developing,” Dovrat explained. “Instead of rendering their scripts on the client-side (the browser), Zaraz mimics the script behavior on its backend and then makes the browser fire the already constructed request. This means zero third-party JavaScript is ever delivered or evaluated on the browser.”

Elsewhere, where “heavy” widgets are required for video players, chatbots, and such, Zaraz switches in a lighter-weight version that loads first, enabling the full version of the tool to load only when the browser “reaches interactivity or upon user interaction.”

Ultimately, Zaraz is setting out to boost website performance by taking on as much of the heavy lifting as it can, while remaining mindful of the functionality offered by the various tools that websites have integrated with. Product analytics tools, for example, often record sessions or collect heatmaps of user behavior to help developers improve their websites — this can only be done at the browser level. In such instances, Zaraz offers users what it calls “selective load,” whereby its users log in to the Zaraz dashboard and stipulate rules for each tool. This could be when to load a session recording tool, for example, where they choose to enable the tool only when the user is on a strong network or on a specific browser.

“If someone is riding the metro shopping for a new pair of sneakers, and their connection level is low, it doesn’t make sense to damage their experience even more by loading such tools,” Dovrat said.

All in all, Zaraz claims it can make websites as much as 40% faster. The company arrived at this figure after creating a bot that scanned the top 5,000 websites in the U.S., revealing that companies use 22 different third-party tools per page on average spanning analytics, marketing, and more. “We discovered that, on average, third-parties account for 40% of their ‘time to interactive‘, and other metrics,” Dovrat said. “From the user perspective, the page usually behaves exactly the same without these tools [when Zaraz is used], except 40% faster.”

Zaraz also created its own performance analyzer tool, enabling anyone to paste in any URL to measure the impact that third-party tools are having on a website. 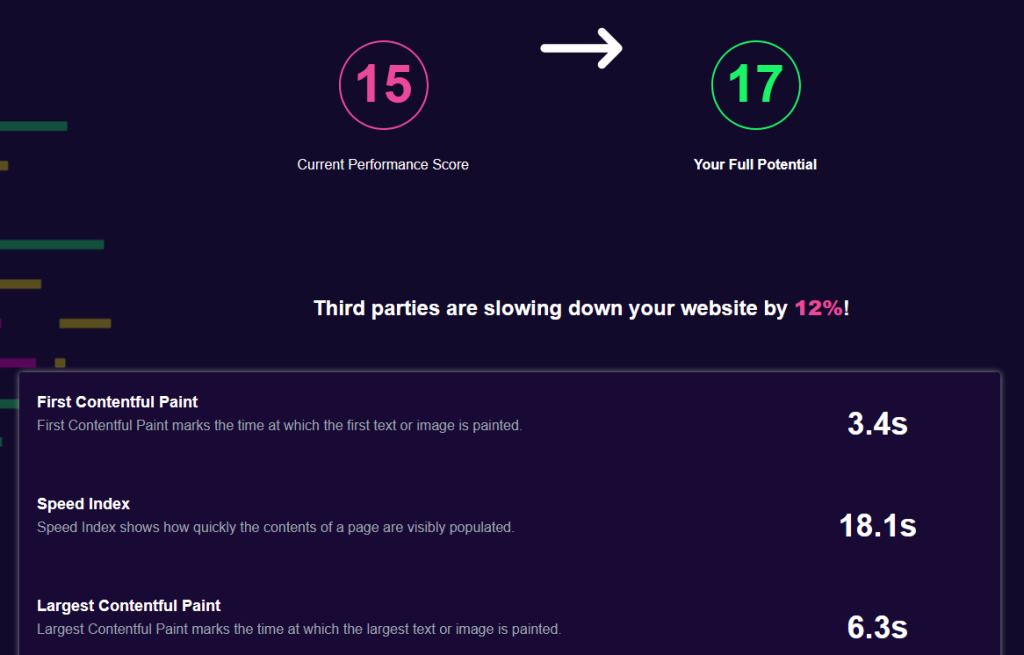 Above: Zaraz performance analyzer: Performance score (could do better)

Today heralds the full, official launch of Zaraz after an extended beta period. The company is adopting a freemium business model, though the actual free tier won’t be available for another few months. When it’s available, websites with fewer than 500,000 page views a month can use Zaraz without paying a penny, after which the premium tier kicks into gear at $950 per month, which covers up to 2 million page views and offers additional services such as engineering support.

The enterprise plan, which ships with “custom pricing,” covers unlimited page views, SAML single sign-on (SSO), custom integration for internally developed scripts, and on-premises data retention. Dovrat notes that Zaraz is built on serverless architecture, meaning that it serves only as a pipeline and never saves data on its backend. “If customers want to save their data, they can use our pipeline to save it to an on-premise data storage,” Dovrat said. “However, the pipeline itself only runs on our backend.”

Zaraz currently has five employees spread between Stockholm, Lisbon, Brussels, Chicago, and Bucharest. With its seed investment, Dovrat said that the company plans to grow its distributed development team across Europe.