If solar power is expensive in part because the materials come dearly, then use cheaper materials. That’s the design principle behind thin film solar cells, and now also behind a form of concentrated solar using plastic balloons, designed by a firm called Cool Earth Solar.

Concentrated solar uses mirrors to shine more light onto regular solar photovoltaic cells, in order to get more energy, and thus more profit, out of a single cell. However, the mirrors themselves and machinery needed to keep them precisely aimed usually drive the cost per watt back up.

Cool Earth’s idea is to use a reflective inflatable made out of mylar, a cheap plastic often used for food packaging, to reflect light onto cells. The company claims that its scheme produces energy at a lower cost than natural gas plants.

The balloons, which are about eight feet across, are hung on cabling arrays that keep them turned toward the sun. The top layer of plastic is clear, while the underside is coated in a reflective material, directing sunlight back onto a solar cell in the center.

Because of their design, the arrays can’t be use on a rooftop, and their size means they’re an unlikely candidate for urban installation. Cool Earth is planning instead to install them on farmland, suspended 12 to 14 feet above the crops.

The company will be handling deployment of the arrays itself, and will profit from selling electricity back into the grid at about 10 cents per kilowatt, according to CEO Rob Lampkin. The funding, Cool Earth’s first, will be used to ramp up production of its concentrators to about 50 megawatts per year by 2009.

An unnamed private equity fund provided $20 million of the $21 million total funding; Lampkin says he made pitches to a half dozen top Valley firms, but “amazingly enough, [the PE firm] had the best deal and moved the quickest.” Cool Earth is based in Livermore, Calif. 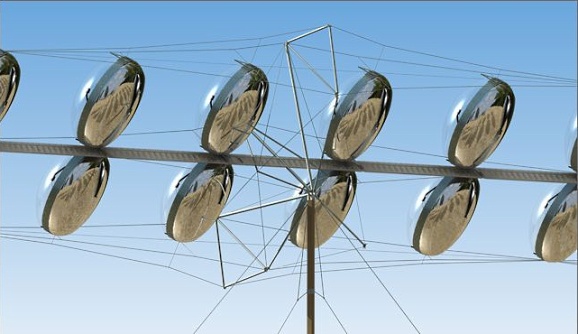