Covalent Solar, a startup being spun out by a team at the Massachusetts Institute of Technology, has yet another idea for concentrating solar photovoltaics: Layered glass with organic dyes that let some wavelengths of light through, and trap others, channeling the light to solar cells at the perimeter of the “panel”. 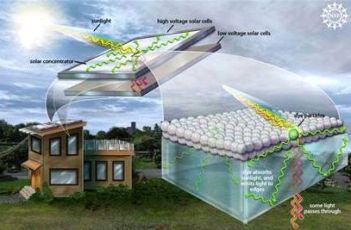 The concentrators, which would look a bit like windows, could be used as cheaper alternatives to rooftop solar panel installations. And unlike other concentrating panels, they would not require cooling, because the solar cells used can be specially made to capture light of the wavelength being sent to them.

Oddly enough, a number of reports appearing today (for example, in the Associated Press) suggested that Covalent’s concentrators would be of use in actual windows, but cofounder John Mapel made no mention of that possibility when we talked last week. That’s no great surprise — it would be difficult to get high-intensity light into vertically-positioned windows, much less windows placed on the wrong side of a building.

In the northern hemisphere, that often means any side besides the southern wall — also a good criticism against Xtreme Energetics, which recently received a ton of attention from press for its supposed utility in architecture (our own coverage focuses on the technology). A final problem is that once Covalent’s concentrators were installed as windows, they would modify the light entering the building, turning it odd colors and diminishing its strength. Call it a replacement for stained glass, perhaps.

Those problems notwithstanding, windows or skylights (which have their own problems) are a potential use in the future, if Covalent’s technology proves cheap enough. How far away that point is, Mapel isn’t certain. The main costs for the concentrators come from the glass itself, which is dirt cheap at $5 to $10 per square meter, and the more costly dyes, which are about $50 per kilogram and are applied by a thermal evaporation technique. The end product may cost $100 to $400 per square meter, not including the solar cells around the edge.

At the moment, though, Covalent is still in its research stage, and most of its data is uncertain. The company will be showing off to potential investors at Copenmind, a cleantech event taking place this year in Denmark, and it is considering a venture round. Mapel says that will either be for $1-2 million, or a great deal more than that, if certain research goals are met.

A report on Covalent’s technology will also be published in tomorrow’s edition of the journal Science.