Pay no attention to the 2 million barrels of fossilized dinosaurs inside this ship, en route to the cars that will incinerate them and spew them into the atmosphere.

Instead, look at the supertanker’s sails! And its solar panels!

That’s right, this is an oil tanker powered by the wind and the sun. Let that sink in for a minute.

Richard Sauter of Sauter Carbon Offset Design released his design for the “solar hybrid supertanker” today. If the ship is ever built, you can bet that some big oil company will be using it to tout its “green” credentials in short order. 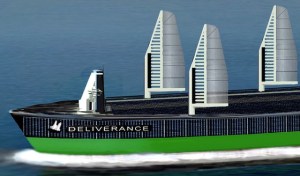 “Not [using the technology available to us] is allowing boats over this same period of time to put up to 6 billion tons of GHG into the biosphere needlessly,” reads the Sauter Carbon Offset Design website.

As Sauter’s site reads, the International Maritime Organization, Richard Branson and green technology company Wartstila believe a 75 percent reduction in these emissions is a completely realistic goal and Sauter’s team agrees. They have already created a slew of boats and vehicles to that end, but the real gold was tackling the most ironic ship ever: the oil tanker.

The ship is a 330,000 dead weight tonnage (DWT) tanker holding up to 2 million barrels of crude oil and it runs on wind, sun and a sprinkling of its own liquid natural gas. She is considered Post Panamax, or designed for the newly installed large locks on the Panama canal.

Chipping away at the 75 percent starts with the new and improved hull by Mitsubishi. The hull is called a bubble hull and allows for less drag on the ship herself. This drag usually creates friction which must be powered through, and in order to do so, ships consumer more energy. Having this hull in tandem with the new hybrid engine reduces up to 35 percent of greenhouse gas emissions, well on our way to 75 percent.

The hybrid engine, a Wartsila’s liquified natural gas (LNG) hybrid power system, uses both gas and solar power from the ship’s built-in SunPower Solbian solar panels. She is also outfitted with sails created by DynaWing, which when used in conjunction with the Warstila power system creates 20 megawatts of energy, enough to run the entire ship 10 megawatts below the usually required energy supply.

Another 20-30 percent of emissions are reduced with these sails and the last 15-20 percent are reduced using the solar panels.

The ship overall will cost 15 percent more than the regular price for a plain old, fully-polluting supertanker of the same capacity. There is an big benefit for business people considering the added cost, however.

“A Solar Hybrid Post Panamax VLCC [very large crude carrier] presents us with a  major win-win scenario,” said Sauter in a jargon-filled statement. “For apart from safeguarding the planet, oil companies can look forward to savings of up to 60 million dollars a year on the purchase of fuel.”

That means that at today’s regular prices for these supertankers, Deliverance will not only pay for herself in 4 years, but will save over $1.5 billion over her years in service. In the end, the super tanker will use 110,000 tons of carbon dioxide a year, which will save 3 million tons over a 25 year lifespan. That’s great, but when it docks at port and its owners celebrate the good deed of saving the atmosphere so much energy, they will also be able to rejoice in the 2 million barrels of oil it hopefully won’t spill on the way over.

If you’re as excited as VentureBeat executive editor Dylan Tweney is about the supertanker, click here for a full-size rendering of the ship, suitable for making into your desktop wallpaper.