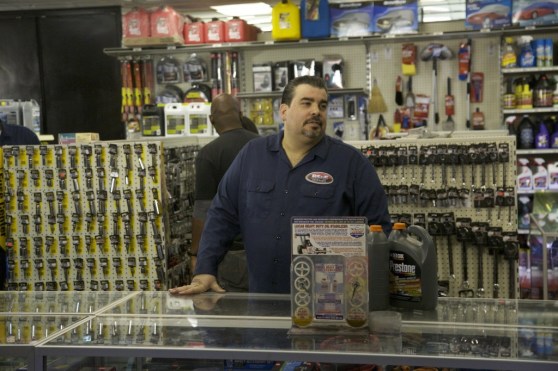 Talk to any independent auto-repair mechanic, and you’ll learn that the single most important item that keeps a shop in business is brakes.

But hybrids and electric cars use their friction brakes far less aggressively than regular cars.

That’s because when the driver presses the pedal, some or all of the slowing comes from engaging an electric motor that acts as a generator to turn the car’s momentum into electricity that recharges the battery pack.

So what happens as hybrids and electrics grow more popular over the years and decades to come?

Enter Joe Ferrer, owner of BS&F Auto Parts in the Bronx, New York. He’s the star of “Hard Parts: South Bronx,” a show based on the day-to-day life of his busy store.

Ferrer says that brakes are easily 35 to 40 percent of his total business. Replacing rotors, calipers, and pads keeps his shop humming.

But on hybrids, brake jobs aren’t needed every 15,000 miles as they are on conventional cars–more like 45,000 miles, he says.

“That will have a tremendous impact on my business,” he worries. “It’s an area where parts stores and shops make a lot of money.”

And he worries that the complex power electronics and computerized control systems of electric and hybrid cars mean they’ll only be serviceable by dealerships, not independent shops.

Over the course of a long chat with Ferrer, he admitted that such a change wasn’t likely to happen overnight.

And we noted that even the most optimistic analyses project that by 2020–eight years from now–hybrids and plug-in cars will only total perhaps 10 or 15 million vehicles, out of more than 1 billion vehicles on the planet.

In other words, there’s a very long tail of older vehicles that will continue to need servicing. And because cars are better built and longer-lasting now, they may have a longer service life than those built in the Eighties, when Ferrer first got into the business.

It’s true, however, that one selling point of battery-electric cars is how little service and repair they need.

Or as one owner crisply summarizes it, “Yep, wiper blades and tires, that’s it.”

That doesn’t apply to plug-in hybrids, though. While they too use regenerative braking, they still carry engines, which will need exhaust systems, accessory-drive belts, spark plugs, and so forth.

But over time, Ferrer probably does have a point: Continuing system integration, more electronics, and improved quality mean that independent shops may have less opportunity to do the run-of-the-mill repairs that have kept them in business for a century.

What do you think? Should Ferrer worry, or is it the next generation of auto mechanics who may not be able to open their own shops?

Leave us your thoughts in the Comments below.

And if you want more of Joe Ferrer, you can watch “Hard Parts” on Speed TV (Tuesdays at 9 pm Eastern, 6 pm Pacific).