When the CEO and product development manager of Zero Motorcycles first wheeled their electric motorcycle up to my front door, it didn’t look like much.

A slim, 120 pound bike, the Zero-S testing model comes with none of the bulky appurtenances of a regular motorcycle. Instead, there’s only a rectangular battery and a small engine, discreetly tucked beneath the seat.

It looks like a low-powered dirt bike, useful merely for fooling around. But looks can be deceiving. The Zero has significant potential as a form of transportation, and may spark a small revolution for motorcyclists.

Unlike electric cars, which have been loudly championed by environmentalists for over a decade, and lower-powered conveyances from the IZIP to the widely hyped Segway, electric motorbikes haven’t gotten much attention. The few that have been developed have mostly been one-off side projects of engineers; the one-of-a-kind KillaCycle, which claims to be the world’s fastest electric motorcycle, is also the most publicized. Chances are, you haven’t heard of it.

Having already sold out of their initial run of 24 bikes, tiny Zero is busy gearing up for its next edition. Among the pre-orderers for the $7,000 Zero-S 2008 model, which should appear within three weeks, is Google co-founder Larry Page, in for three. The first Zero motorcycles will begin shipping next month, although the company expects to be backlogged for the remainder of the year while it gears up production. (The company’s web page is outdated; for pre-orders, they’re currently taking calls.)

Back to the test ride. Before showing up, Zero’s acting CEO, Damon Danielson, had promised the Zero would “blow your socks off.” Once I saw the bike, I had reason to doubt him. When I think of a powerful bike, I think of a hulking Ducati or CBR, not a demure package like the Zero.

What Danielson and the engineering mind behind the Zero, Neal Saiki, failed to mention is that electric engines have far more torque than gas engines when starting from a stop. I kept my socks, but the bike almost left me behind — the first time I gently rolled the hand-grip back to accelerate, I was jerked across an intersection, with the bike standing up on its rear wheel.

The Zero motorcycle I tested is the company’s lower-powered model, coming in at the equivalent of a 250cc motorcycle. But during my test drive, it felt significantly more powerful, zipping up intimidatingly steep San Francisco hills with ease — the low body weight of the bike makes a large difference.

The Zero can keep the pace for about 50 miles before a recharge (at least, that is what is reported), which takes two hours on average. Based on Californian electricity prices, it can be charged for about 40 cents from empty, plugging into any ordinary wall outlet.

The brain behind the Zero is Neal Saiki, the aforementioned product manager. An aeronautical engineer, Saiki helped popularize the use of space-age materials in bike frames at companies like Trek and Santa Cruz Bicycles; while still a student, he led the team that invented the world’s first human-powered helicopter. 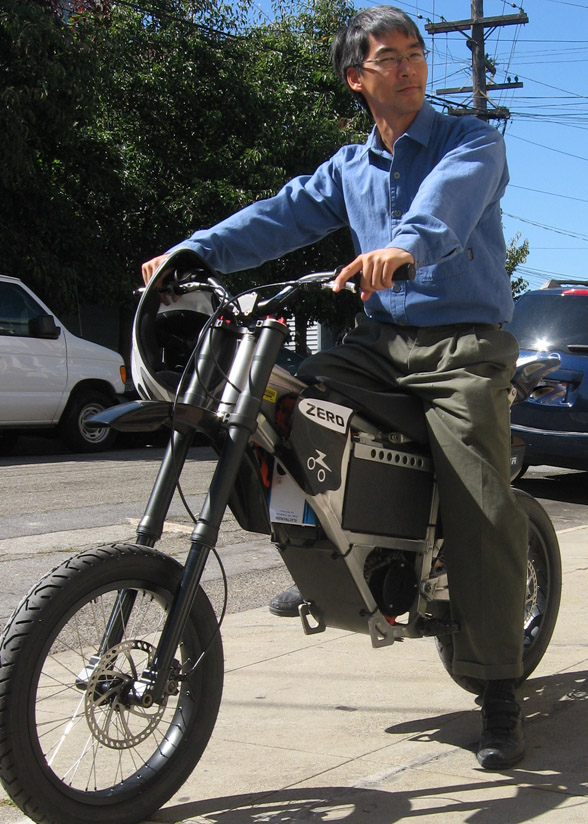 Saiki claims to have made breakthroughs in the power integration systems required to make a high-powered but small vehicle like a motorcycle able to run without setting its own battery aflame. When battery systems are crammed into smaller spaces, much like computer chips, efficiency issues arise.

But the Zero is innovative in more than one way. With its light weight, it can be shipped for as little as $200, opening up an unusual distribution strategy; Zero wants its customers to be able to order the bike from outlets like Costco and Amazon, having it shipped to their door.

With only about 200 moving parts, the bike will rarely require servicing except when the battery wears out, which takes about five years. The lithium-ion batteries, produced by a company called Emoli, are even rated for regular landfill disposal.

And due to intentionally placed loopholes in the laws of California and 17 other states, the electric motorcycle requires no license to operate, as long as you keep it more or less to the right side of the road, which is considered a bike lane. (You aren’t misreading. Anyone — perhaps I should say any idiot — can buy an electric motorcycle and zip around at high speeds, without any training at all. We doubt this loophole will last, if a large market develops.)

So what’s next for Zero? Securing venture funding, the founders say. They’ve so far gained commitments for about $5 million, but are seeking more offers from lead investors. They’re also considering going as high as $8 million, although they don’t think they’ll need any more than that. They’re currently in talks with several funds, but hope to be approached by more.

As production scales, Saiki says, he will be able to bring the costs down; individual components are currently produced at factories around Asia, then shipped to the US for final production at the headquarters in Scotts Valley, Calif.

Assuming the prices for his batteries continue to drop as they have over the past year, the price for the bikes could drop to $4000 within a year and a half, when the next model, the Zero Way, is released. (See the chart, below, for comparisons in cost and performance against other forthcoming electric vehicles — note that the Honda has a gas engine.) 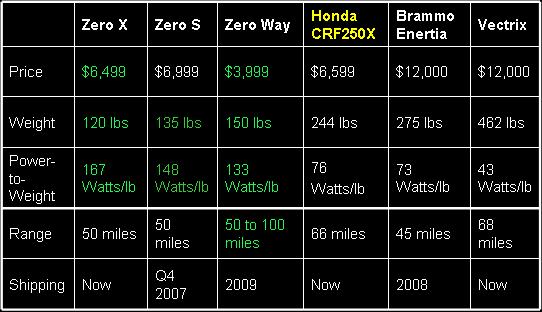