Taking a page from T. Boone Pickens, who made waves when he announced that he was building the world’s largest wind farm in Texas, Continental Wind Partners and CEZ Group have concluded a deal to create Europe’s largest onshore farm, with a total capacity of 600 megawatts (onshore farms tend to be in hilly areas 3 km or more inland from the shoreline while offshore farms are 10 km or more from land).

As part of the deal, Continental Wind Partners, a Wilmington, Delaware-based wind developer that funds projects in Romania and Poland, will sell two of its Romanian farms to CEZ, a large utility based in the Czech Republic, for €1.1 billion ($1.6 billion). The combined project will be twice as large as the next largest permitted onshore farm in Europe and three times the size of the largest farm that’s already operational — Spain’s Maranchon wind farm, which has a 208 megawatt capacity.

The farm will become operational in stages, with initial construction slated to begin this September and the first 139 turbines expected to be up and running between April 2009 and June 2010. CWP, which will manage the construction, plans on having 347.5 megawatts of total capacity up by the end of 2009, with the remaining 252.5 megawatts operational by the following year.

The turbines for the project will be procured by Good Energies, an investor in renewable energy that helped found CWP in 2007. CWP plans on having 600 megawatts of wind capacity permitted in Romania by the end of the year and 280 megawatts in Poland by 2009. Good Energies’ portfolio companies currently have a pipeline of wind and solar projects that add up to 3,000 megawatts.

While a far cry from Pickens’ ambitious 4,000 megawatts, this deal would supplant Scottish and Southern Energy’s recently unveiled 152-turbine onshore farm as Europe’s largest wind project. SSE’s £600 million ($1.1 billion) project will have a total capacity of 548 megawatts — enough to power up to 320,000 homes — when it is completed in 2011. 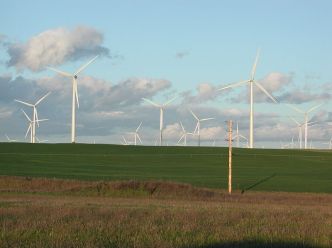