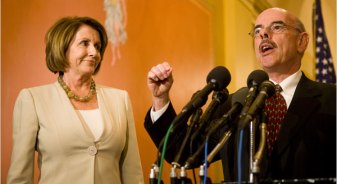 Today, the American Clean Energy and Security Act — the most expansive legislation aimed at curbing global warming ever introduced in Congress — won approval from the House Energy and Commerce Committee 33-to-25, with Democrats and Republicans splitting along party lines. The win closely follows president Barack Obama’s call for a 30 percent reduction in vehicle emissions by 2016.

Despite the momentum, the bill still has a long road ahead of it. It still has to successfully pass through several other House committees — next stop the Ways and Means Committee — before it hits the floor for a formal vote. If it passes that stage, it will be tossed to the Senate, where Democratic leaders are still scrambling for votes, and it isn’t looking good.

The legislation would deploy a cap-and-trade program to manage greenhouse gas emissions (basically a system that provides financial incentives for sharp reductions). It would also require increases in renewable energy use, establish efficiency standards for buildings, and slash 2005-level carbon emissions by 17 percent by 2020, and by 883 percent by 2050.

Democrats say the act is a bold and necessary break from the half-hearted environmental policies of the Bush administration. They also stress that its approval would dramatically ease the U.S.’s dependence on foreign oil, thus strengthening national security — an argument that has typically played well among defense-minded conservatives. But security isn’t the hot-button issue it used to be, with the dank state of the economy often taking precedence. This has been the Republicans’ tack, with party leaders claiming the bill would cause energy costs and unemployment to skyrocket, especially in cities like Detroit that have long relied on jobs in the automotive and manufacturing industries. Not only that, it would mark the beginning of the deepest government involvement in economic regulation since the New Deal era, opponents say.

And it’s true. If the act passes, it will empower the government to create a host of new agencies responsible for distributing tax credits, subsidies and rebates (perhaps amounting to $750 billion for consumers), to selectively fund cleantech enterprises, to manipulate prices and nationalize resources. At once massive and complex, the language is rife with loopholes and opportunities for corruption, as Washington Post columnist Steven Pearlstine points out. That being said, supports say that without immediate action, nothing this ambitious may ever go through, at least not in the next eight years, and the future of the planet does — as dramatic as it may seem — hang in the balance.

For all of these reasons, the bill has set off one of the biggest lobbying firestorms in recent months, with both former vice president Al Gore and Obama making personal calls to voting members of the committee on the legislation’s behalf. On the other side, trade groups like the National Association of Manufacturers and representatives from the coal, oil and national gas industries, reminded centrist Democrats that their political capital rests largely on their constituents’ pocketbooks. And of course to the far left, environmental groups like Greenpeace and Friends of the Earth criticized the bill for not going far enough.

Looking ahead to a possible House vote, when representatives Henry Waxman (D-Calif.) and Edward Markey (D-Mass.) first introduced the act in March, 36 Democrats said they were wary of the bill’s impact on industy in their districts. To smooth things over, Waxman (pictured above) wrote billions of dollars’ worth of free pollution permits — called allowances — into the legislation, a compromise that has diluted enthusiasm and raised eyebrows among its supporters. This departs from the environmental plan Obama campaigned on, in which permits were to be auctioned off for a price, not simply given away. But he has yet to intervene.