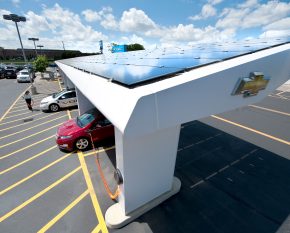 Car manufacturer General Motors has made a $7.5 million strategic investment in solar-panel provider Sunlogics, which will install solar panels on several GM facilities.

Sunlogics specializes in developing and installing rooftop solar panels that generate small amounts of electricity — enough to charge an electric car, for example. That’s useful to electric car manufacturing companies because it helps emphasize the clean-energy benefits of driving an electric car or hybrid electric car, like GM’s Chevy Volt.

“The auto companies are exploring this not only because it emphasizes the environmental benefits of driving an electric vehicle, but also because in some instances it can make business sense in reducing the cost of electricity,” Pike Research senior analyst John Gartner told VentureBeat.

“We have a trust factor with Sunlogics, we have a history with them, they have the right technology and the right cost point,” General Motors Ventures deputy director Tim Brumbaugh told VentureBeat. “As a result of our investment, they’ll be able to not only manufacture their own (photovoltaic) panels, but focus on their real bread and butter: developing, engineering, constructing and installing the solar panels.”

General Motors is not the only car company investing in solar panel providers for dealerships. Nissan, Honda and Mitsubishi are installing rooftop solar panels on their factories and at dealerships to charge electric cars. It has the double effect of promoting the clean technology as well as reducing electricity costs.

“The trend of solar at car dealerships is very likely to grow over time, especially if combined with an energy storage system such as lithium-ion batteries that can maximize the value of the solar power by avoiding paying for electricity when it is most costly,” Gartner said.