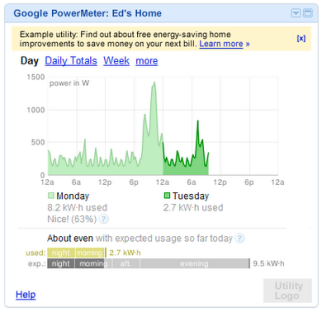 Earlier this year Google made its presence in the smart grid space known with the unveiling of PowerMeter, a Google gadget that lets users view how much electricity they’re using on their home computers. The service depends on data collection from smart meters, and now Google’s announcing that it’s landed 8 partnerships with smart metering utilities — a very important step toward a wider rollout.

Ranging in size and geography, these partners include San Diego Gas & Electric, Florida utility JEA, India-based Reliance Energy, the Wisconsin Public Service Corporation, the White River Valley Electric Cooperative in Missouri, the Toronto Hydro-Electric System Limited, TXU Energy in Texas and Glasgow EPB based in Kentucky. Their adoption of PowerMeter will be immediate. With the gadget only available to select customers right now, Google has plans to broaden its release before the end of 2009.

The company is also on the lookout for partners that can help facilitate the use of PowerMeter. For example, it has reached an agreement with meter management company Itron to help utilities enable their customers (both residential and commercial) to view their usage on personalized iGoogle homepages. (Google won’t store any personalized information.) The PowerMeter gadget will also be branded and act as a portal to each utility’s website.

SDG&E conducted independent research earlier this year showing that consumers cut their energy use by 5 to 10 percent when they know how much they’re using. The utility has already installed 200,000 digital meters and plans to reach all of its 1.4 million customers by the end of 2011.

Those looking to learn more about PowerMeter and its partnership strategy are invited to attend several upcoming webinars on June 2 and 16.