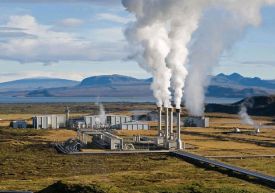 [Update: Lost in the press blitz about the Google.org investment was the fact that Altarock took $26.25 million in total. Advanced Technology Ventures, Khosla Ventures, Kleiner Perkins and Vulcan Capital all participated.] Here’s a fact: If you go outside, wherever you are, and start drilling a hole, once you get deep enough it will become very, very hot. Using that heat for electricity is the cornerstone of geothermal power, and it’s great if you can reach the hot spots — just ask Iceland. But much of that heat is difficult to reach or use, a detail that has inspired the latest investment by Google.org.

The type of geothermal power that has been used for over a century comes from underground reservoirs of water that are heated from below. Areas that are easy to access, like California’s Geysers geothermal development, are a valuable source of power. But in many other places, there are heated areas relatively close to the surface — in Google’s view, that means three to 10 kilometers down — that also don’t contain water.

To draw power from those locations, you’d need to not only drill down far enough, but also pump in water and retrieve it as steam to run turbines. That technology is called Enhanced Geothermal Systems. The Google.org funding, for $10.25 million, has been split two ways. Altarock Energy will get $6.25 million, and Potter Drilling will receive $4 million. Separately, the Southern Methodist University Geothermal Lab will get about half a million dollars for ongoing research.

Between the three, Google is tackling the various requirements for drilling and injecting water, as well as mapping out new resources. However, the amounts are small compared to other recent Google.org investments.

We speculated that Google.org would be making a geothermal bet back in May, right after it had helped plow over $200 million into solar thermal firms Brightsource and, separately, eSolar. Those amounts suggested that Google was ready to put serious weight behind any technology it thought could take off.

The investments announced today could indicate that EGS isn’t ready for prime-time, or that the companies Google funded are simply a bit earlier in the development cycle. Or it could mean that Google is nervous about some of the risk factors with EGS, like the possibility of losing large amounts of the water you pump in or destabilizing the ground beneath plants (not a small concern in California).

Another company we’ve written about, Australia’ Geodynamics, is planning thousands of megawatts of geothermal development using technology similar to Altarock’s, but has already had to abandon at least one well that it drilled. If successful, both it and the Google companies estimate that they can produce geothermal power for under 10 cents per kilowatt hour, the usual figure required for success.

We’ve also written about Altarock before, when it received at $4 million investment last year from Kleiner Perkins and Khosla Ventures.