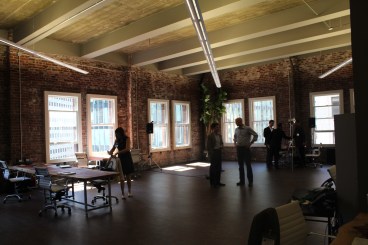 Greenstart’s new office space has a slick, green feel to it — compared to the semi-industrial feel that other startup incubator offices like AngelPad have. The whole space came together in the span of about eight weeks with “a startup’s budget,” Greenstart founding parter Mitch Lowe told VentureBeat. The office space is a critical part of the incubator experience because it gives the startups a professional environment with nearby mentors and peers who they can feed off while they work on their business.

“We were basically holding our breaths, saying, ‘please be good, please be good,'” Sylvatex co-founder Virginia Klausmeier, one of the incubator’s companies this class, told VentureBeat. “And it ended up being awesome, we are so excited.”

Greenstart hosts clean technology startups that fulfill three goals: they’re “fast,” in the sense that they can generate real revenues in less than a year, and they either reduce reliance on fossil fuels or improve existing clean technology. Most of the companies that enroll in the class have to demonstrate some kind of potential business plan, though the incubator isn’t against hiring companies that are in the “idea phase” like other incubators, such as Y Combinator, usually bring on board, Lowe said.

“Most companies will enter at the point where they are starting to think about commercialization,” Lowe said. “We have companies in this class that are mostly ready to start working on business models even though those will change over time.”

Sylvatex, for example, is a biofuel company based on technology that the co-founder’s father developed over the span of 12 years. The company mixes vegetable oils with diesel fuel to make cleaner fuel that will cost less than typical diesel fuel. But rather than create a separate manufacturing plant to produce the fuel, the company simply wants to license out its technology to larger fuel producers — shortening the amount of development time and reducing the company’s upfront capital costs significantly.

“We’re not trying to recreate the wheel and make our own blending plant, we learned from the guys that failed at doing that,” Klausmeier said.

The new incubator hosts three classes of companies each year and invests between $25,000 and $100,000 into each company. It purchases common stock in the companies rather than a convertible note, which most incubators like Y Combinator and AngelPad use. This class featured four clean technology companies, but the next class starting in December will probably have between six and eight startups, Lowe said. Greenstart wants to incubate 500 startups by the end of the decade, he said.

“I love the term accelerator, because we don’t have time to wait, we need this technology now,” Lee said. “We need it not only to maintain our status as a world center for clean technology, but when you start here, those jobs turn into hundreds as your business matures.”