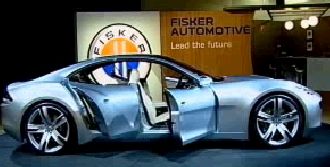 Tesla Motors may have significant competition in the high-end electric vehicle space soon, if Fisker Automotive continues on its current path. The Irvine, Calif. sports car company just announced another $65 million in funding, led by a Middle Eastern firm, the Qatar Investment Authority.

Design work is well underway on Fisker’s first car, the Karma. Unlike Tesla’s model, the Roadster, Fisker is planning on making the Karma a plug-in hybrid electric vehicle (PHEV), which should make it more practical for regular or long-distance driving — assuming anyone is looking for practicality in luxury sports cars that cost double the average person’s yearly income.

However, Fisker is following Tesla’s lead in outsourcing its manufacturing. The company announced a couple months back that Valmet, a Norwegian contractor, would build the Karma starting late next year. Once fully scaled up, Fisker expects to make, and hopefully sell, around 15,000 vehicles per year.

Building a car is notoriously difficult, so it should be interesting to see whether Fisker can stick to its deadlines. Its fundings so far suggest that it’s making good progress. Along with its rounds from previous backers Palo Alto Investors and Kleiner Perkins (who also joined this investment), Fisker has taken over $75 million. But ultimately, the company will need double that amount or more to bring its plans to fruition.