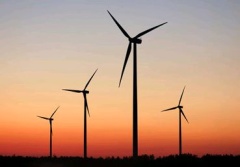 It’s safe to say that the cleantech investors who pumped tens of billions of dollars into cleantech over the past three years didn’t expect a serious recession any more than anyone else. Yet with one on the horizon, it looks as if heavily funded technologies like wind and solar power could get hit from more than one direction.

The obvious danger is a slowdown in venture funding, as pointed out in a leaked Sequoia Capital presentation and this contributor piece from Advanced Technology Ventures’ Todd Kimmel. Companies without large funding rounds to draw from will struggle to commercialize their products, especially mid-stage cleantech outfits, who need a lot of capital to move from pilot demonstrations to commercial installations.

More broadly, it’s questionable whether even the biggest companies will be able to tap into debt markets for ambitious projects like massive solar power plants in California’s Mojave Desert and San Luis Obispo County. Those look like safe investments that will be able to attract capital. But wind, which is a more proven technology than solar, is already having trouble getting enough capital, according to the WSJ Environmental Capital blog.

Another looming question is the price of oil. When oil was spiking upward, renewable energy looked like the obvious beneficiary. But a reaction was brewing in response to high pump prices: Falling demand. That promised to keep oil prices stable, but the fright in the markets appears to be causing a more serious contraction in oil prices. Today, oil fell below $80, marking a 13-month low.

As always, it’s impossible to predict with any certainty which way oil prices will head. But given a recession, continued low demand seems likely, and oil prices are set at the margin of supply and demand. While low prices are probably not permanent, consumers are notorious for their short memories. That means that in the interim, products like electric cars could lose some of their heroic aura. Biofuels like cellulosic ethanol, which look fine right now, could also suffer.

There are several other sectors that could be troubled, including green building materials — who would start construction now? — and water, which almost always requires a lot of money. But the final area that deserves special mention is carbon trading and emissions caps. The Associated Press reports that the Kyoto Protocol, which attempts to limit emissions worldwide, could be ignored as developing countries move to protect their assets.

At home, that could also be true. Take the Chicago Climate Exchange, for instance, which recently started up. Prices were higher than expected for its initial round of carbon offsets, but such commodities are likely to be viewed as luxury items in a recession. And for those who need excuses not to buy offsets, there are plenty of good ones, as Grist points out.